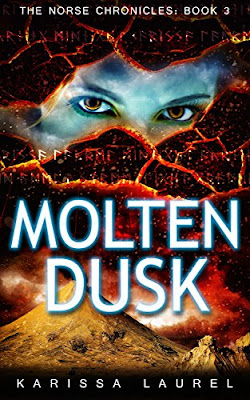 “While recovering from a devastating betrayal, Solina becomes increasingly drawn to Thorin as he helps her hunt down Skoll, the mythical wolf who vowed to kill her. If she can find and destroy the beast, she’ll bring a swift and brutal end to her enemies’ schemes. But nothing ever goes as planned in Solina’s strange new world.

During her search for Skoll, Solina uncovers a plot to unleash a battalion of legendary soldiers and launch an apocalyptic war. Before she and her allies can locate the fabled army, several ghosts from her past return to haunt her. Solina must fight for life and the fate of the world, or her hopes for love and a peaceful future will go up in flames.”

“Karissa lives in North Carolina with her kid, her husband, the occasional in-law, and a very hairy husky. Some of her favorite things are coffee, chocolate, and super heroes. She can quote Princess Bride verbatim. She loves to read and has a sweet tooth for fantasy, sci-fi, and anything in between. Sometimes her husband convinces her to put down the books and go to the flea market to find something rusty to reuse and purpose.”

WOW! Karissa Laurel is a wonderful storyteller. All of her characters are authentic and well written with depth. The plot is riddled with twists that keeps the tension and intrigue high. There is double-crossing as well unexpected help when you least expect it. And epic battles with mindless soldiers that Solina’s fire can’t harm.

Solina’s journey is enhanced by a vision quest, which helps her sort out the nightmares she is having and the guilt she feels about her brother’s death. Thorin also shares some of his fond memories as well as heartbreaking times of his past with Solina.

Through it all Solina remains true to herself, meaning she still defies Thorin occasionally. Despite that, they both do their share of saving each other in dire times. Solina knows how Thorin feels about her, but she is strong-willed and won’t admit her emotional walls are crumbling.

There is so much more I haven’t mentioned and I can assure you that you will not be disappointed in Molten Dusk. All plot points are tied up nicely with a satisfying ending. I’m not sure if this series is finished though, I can see other stories stemming from this solid foundation.

Molten Dusk is book three in THE NORSE CHRONICLES. I would recommend reading this series in order starting with Midnight Burning then Arctic Dawn.