Review: Maggie on the Cusp: Transcendence Book 2 by Lynne Cantwell 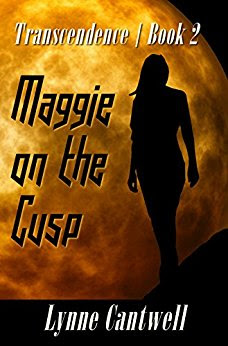 “Maggie Muir Brandt has been charged by a Shawnee creation spirit with the renewal of the earth. But her elderly mother is losing her grip on reality, and Maggie feels she must set aside her own life to move back to her childhood home to take care of her.

Maggie’s brother Sandy objects, saying it would be better for their mother to live closer to him. Sandy abused Maggie all through their childhood, and that history makes her suspicious of his sudden interest in their mother. Then, in a vision, she sees a water panther – a monster – attack a drowning doe, and she knows the water panther is Sandy and the doe is their mother. In her vision, Maggie thwarts the water panther’s attack. But she knows he will be back, and she can’t hold him off forever.

It’s an impossible situation, but it must be solved, and soon. Because time is running out for the earth, and Maggie can’t fulfill her destiny until she has subdued her own demons – including Sandy.”

“Lynne Cantwell writes mostly urban fantasy and paranormal romance, with a dash of magic realism when she’s feeling more serious. She is also a contributing author for Indies Unlimited. In a previous life, she was a broadcast journalist who worked at Mutual/NBC Radio News, CNN, and a bunch of other places you have probably never heard of. She has a master's degree in fiction writing from Johns Hopkins University. Currently, she lives near Washington, D.C.”

Maggie has just returned home to find her mother suddenly having memory problems, which she didn’t have when Maggie entrusted her care to her brother Sandy. Then she catches Sandy trying to get their mother to sign the deed to her house over to him alone. Compound that with the disturbing dreams Maggie has been having and she decides to take a drive to see if she can sort her thoughts out. Subconsciously she ends up in familiar territory. She recognizes the area as the place she found a turtle effigy as a child, as noted in the first volume of this series, so she gets out to walk the site. Not too far away she finds a bird effigy, which she adds to her necklace with the turtle.

At her mom’s senior center Maggie literally runs into an old classmate who is offering free legal advice to seniors. Luckily, Rick is more than willing to take on Mrs. Muir’s case to update her will and make sure everything is in order to take care of Mrs. Muir’s best interest in the future.

With that problem taken care of Maggie is left to sort out what is going on with Sandy and take a long hard look at her family’s dynamics growing up. This means confronting the truth about everything that has been denied or overlooked just to keep peace in the family. It’s an emotional journey with some devastating results.

Each character is wonderfully written and fully developed. The dialogue is intelligent and realistic. In the first book, Maggie in the Dark, I wasn’t sure how I felt about Riley, Maggie’s ex-husband’s current wife. I now have a new-found respect for her. I can’t wait to see where Maggie’s journey takes her next. Well done Ms. Cantwell, you never fail to impress me.

Maggie on the Cusp is book two of the TRANSCENDENCE TRILOGY, following Maggie in the Dark. It is important to read this series in order.

One instance of adult language.

I found "Maggie on the Cusp" captivating and this is the darkest story I have read from Ms. Cantwell. I am enjoying the "Transcendence" series.

Thanks for dropping in and commenting Ms. Wojcik Berner.