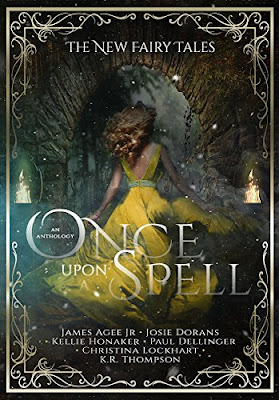 “Six magical tales based on the fairy tales you thought you knew! Discover a mix of fantasy and science fiction stories in this cross-genre collection.”

Red Greta by James Agee Jr. - “Life is dismal for Greta and her brother Hans after he signs a magical contract with a witch. The siblings are bound to one another and the witch’s life-altering demands.”

A Different Sort of Beauty by Josie Dorans - “A curse is laid upon two innocent babes in retaliation for the indifference of the village. Elana is given ethereal beauty with a heart of cold disdain where love cannot grow. Cecil is granted a beautiful heart full of love and kindness that is encased in a twisted and hideous body.”

The Cursed Prince by Kellie Honaker - “Jealous of the king's good fortune, the witch Hazel curses the king's son with the inability to feel fear. The prince spends his childhood embracing every danger and gradually falling into madness. A talking toad, a fireproof girl, a dying goblin, and a deal making dragon must join forces to save the kingdom.”

Walk to the Moon by Paul Dellinger - “The boy dreamed of touching the moon and, when he reached out one night, the moon reached back.”

The Raven of the Loch by Christina Lockhart - “Born the daughter of a great Pictish warrior king, Fiachna is spoiled and headstrong. Before her birth, a prophesy was told- two paths were set before her. One path was full of God's blessings, while the other was full of heartache and despair.”

Rose's Beast by K.R. Thompson - “As her punishment for accidentally turning a prince to a frog, the fairy Morgana has been tasked with fixing other spells that have gone awry. Her next assignment takes her to a tower deep within the Dark Forest guarded by a beast like none she has ever seen.”

James Agee Jr.: “…writes fictional stories that border on the unknown… Stories surround him and he cannot help but to write a few of them down. He firmly believes that words have poser and that if you are reading, you are doing yourself a wonderful favor.” To learn more check out Mr. Agee’s website or Facebook page.

Josie Dorans: “Josie Dorans is the pen name responsible for unleashing the feistier side of a rather nice indie author who grew up in the heartland, currently lives surrounded by the mountains, but sometimes wishes her toes were still in the ocean of her twenties.” To learn more about Ms. Dorans visit her website or Facebook page.

Kellie Honaker: “When Kellie isn’t reading and rescuing animals, she’s busy mastering the art of becoming a hermit while sharpening her writing skills. When she edits her stories, she reads them aloud to her blind rescue dot named Teddy. She considers him to be her most valuable critic.” To learn more about Ms. Honaker visit her website or Facebook page.

Paul Dellinger: Is a multitalented author of short stories, novellas, and a play performed at Virginia’s Barter Theater. He also wrote a radio comedy-adventure serial that ran for two years on a Wytheville, VA station. He also worked as a newspaper reporter for forty-four years. To learn more visit his Amazon Author Page.

Christina Lockhart: “Blessed to be the mother of twins, Christina stays on her toes…She only recently started dabbling in writing and instantly fell in love with her characters. In her downtime, she focuses on her photography and hopes to one day combine that with her love of animal rescue.” The Raven of the Loch is her debut short story/novella. You can follow Ms. Lockhart on Facebook.

K.R. Thompson: “K.R. Thompson writes paranormal stories with a bite and fairy tales with a twist. An avid reader and firm believer in the magic of stories, she spends her nights either reading an adventure or writing one. She still watches for evidence of Bigfoot in the mud of Wolf Creek.” To learn more about Ms. Thompson visit her website or Facebook page.

Red Greta is an extension of Hansel and Gretel’s tale after they leave their parents’ house to live on their own. It’s an engaging tale that will capture your sense of adventure. With Greta’s luck with witches should she trust another to help her and Hans out of their current situation? Enjoyable and highly detailed story.

A Different Sort of Beauty is an emotional and inspiring tale that will pull at your heartstrings. Elana’s mother has done all she can to combat the curse that was placed on her daughter by the angry witch at the annual May Day blessing ceremony after her birth. However, the curse is strong and deeply rooted in the beautiful girl’s cold heart to be affected by a mother’s love. The curse placed on Cecil, at the same blessing ceremony, was the opposite of Elana’s. He was given a beautiful heart full of love in a twisted monstrous body. The mothers of these two cursed babies develop a lasting friendship through the years. Together they come up with a plan. Neither of them took into consideration how this would affect Cecil, even though he was a big part of the plan. I loved this story, and consider it my favorite.

The Cursed Prince is full of many fantastical elements. While you might think the cursed prince, Ezben, might be the hero of this tale, it is witch Hazel’s daughter Chasta who deserves heroine status in this story. Hazel curses the young prince with fearlessness and the castle with a dragon and goblins when the king refuses her gift of Chasta. Chasta is a mere three years older than the prince, who was ten years-old at the time of the curse. Chasta vows service to the king to help protect the prince from his fearlessness. She also vows to herself she will find a way to remove the curse her mother placed, she is not without powers of her own.

I found this a unique and captivating story that will take the reader on an adventure far greater than I expected.

Walk to the Moon took me entirely by surprise. It started out as a fairy tale like story that turned into an emotional drama I wasn’t expecting at all in this anthology. We follow Boyd, a six year-old boy, from a dirt-poor dysfunctional family with two older brothers and an alcoholic father. Luckily for Boyd he had some teachers who recognized his desire to learn. And it all started off with the nursery rhyme Hey, Diddle, Diddle. Walk to the Moon is a captivating and inspiring story of trying to recapture the magic of childhood. Hold on tight for a heart wrenching ride, which may leave you with a sigh and a smile.

The Raven of the Loch is a heartbreaking tale wonderfully told by Christina Lockhart in her debut story. Have you ever wondered where or how the Loch Ness monster came about? It all starts out quite innocent with the 13th child of a great warrior king. Fiachna is the only female child with twelve older brothers. So, of course she was a little spoiled by her parents. She was also headstrong and tended to wander off on her own looking for adventure. She was lucky enough to make some good friends in the magical world around her who helped look after her. The Raven of the Loch is unique, fast moving, and full of vengeance with too much testosterone. Stupid men, ruined my HEA… However, I do believe Ms. Lockhart is a new indie author to watch.

Rose's Beast: In this twist of Beauty and the Beast, Morgana, a blue fairy, is tasked with fixing other fairy spells that have gone awry. Morgana is up to the challenge to set things right, even though her ways are somewhat questionable, which lead to humorous hijinks. She has a wonderful caring personality, but Prince Almond/Ormond has had dealings with her before and he’s not sure he trusts her. (Ms. Thompson switched back and forth on the Prince’s name, I assume this is a proofing error.) All magic has a price and the plot twists are entertaining and I found the twisted tale enjoyable. There is a mystery as to what is happening with the magic scrolls and Morgana has her own suspicions as to who is behind it all. Rose’s Beast is part of The Chronicles of a Blue Fairy.

Once Upon a Spell is book two in The New Fairy Tales anthologies.

Red Greta, A Different Sort of Beauty, The Cursed Prince, and The Raven of the Loch had no proofing issues to mention.

Walk to the Moon – A small number of extra or missing words.

Rose’s Beast – Several proofing errors. Mainly with the prince’s name, it kept changing back and forth. I consider this a grave error.