Review: How the World Ends (Book One) by Rudolf Kerkhoven 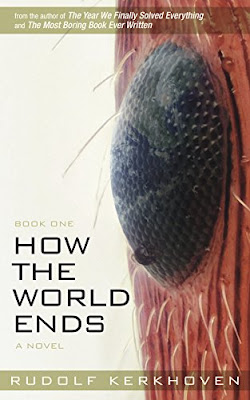 “More than six billion people died on the 14th of August, 2007. Many walked into oceans and rivers. Some leaped from the roofs and balconies of buildings. Others attacked anyone within reach, forming marauding hordes that quickly left no survivors. Within an hour, nearly the entire human race is dead. Without struggle, without resistance, the world has ended. For one family of survivors, a new world now begins.”

The author of several novels, plus the co-author with Daniel Pitts of several choose-your-own-adventure books, Rudolf Kerkhoven lives in the Vancouver, British Columbia area. For more, visit his website.

Well that was different.

As four word summaries go, I don’t think I can do better than that. Nor do I think you’ll find many books that would fit that summary any better. The description of the book explains what happened (most of the world’s population dying through various means, much of it inexplicably self-induced) and tells us about our protagonists, a small family who somehow survive. Then the fun begins. How do they decide what they need to do to continue surviving? What exactly is it that happened? Are the other surviving humans they encounter on rare occasions enemies or potential allies? It’s tagging along with them, trying to figure these things out, that provides the tension and draws you into the book.

How does it turn out? I’m not saying. No spoilers from me. However, I will say that while I didn’t think there were any unresolved story threads at the end, this does indicate it is Book 1 which implies a series with at least a book 2 yet to come.

Thanks for the review! Book Two should be ready early in the new year and Book Three late in 2018. It's all written--it just needs to be carefully edited...