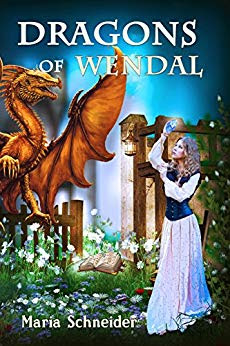 “Learning new magic isn’t as easy as Zoe expected, especially when the mages at Gorgon University seem dead set against teaching. Add in some necessary late-night sneaking about, and Zoe is almost certain to be kicked out. As for exploring the intriguing mysteries across the border in Wendal, well, it has more teeth than she ever imagined.”

“Maria Schneider grew up in New Mexico and currently lives near Austin, Texas with her husband.

After working in the computer industry for twelve years she now enjoys creating messes and inventing characters to find their way clear of her imaginings.

You can find several of Maria's short stories online in such fine magazines as: Coyote Wild Magazine, www.AnthologyBuilder.com, TownDrunkMag.com and Over My Dead Body.

In this enchanting story, Zoe desires to learn more magic than her mother has been able to teach her so far. Her bumbling cousin Lonnie has managed a mage position at the castle in Birk. In one of Lonnie’s magic spells gone wrong, Zoe meets an irate female whose dragon essence has been bound by an enchanted ring. Zoe is familiar with Lonnie’s magic and is able to send her back to Wendal from which she came. Magic and sorcery had been outlawed in Wendal for thousands of years, it is the home for dragons and shifters.

One year later Zoe is in Mage School at the Gorgon University far away from her cousin Lonnie. But Zoe gets caught up in a conspiracy while trying to save a friend who was being kidnapped one evening. Zoe recognizes the dragon lady, Lindis, being forced to marry the friend who had been kidnapped. Zoe is again able to free her but is unable to escape the wolf warriors who showed up to save Lindis as well.

Lindis implores Zoe to unbind the magic in the ring. Zoe warns her messing with another wizard’s magic is a highly specific magic that can go terribly wrong. Zoe is wary and sure that she is not trained enough to attempt such a feat. Derrick, the wolf who captured Zoe, is ordered to guard and protect her at his house with the help of his pack.

The story is unique and delightful as Zoe attempts to teach herself, Lindis, and Derrick the intricacies of drawing glyphs and casting spells with the help of power crystals. The story is told from Zoe’s point-of-view, she is very naïve about the ways of the world and very verbose. It was fun getting caught up in her head as she reasoned things out. She was highly ethical and always determined to do what was right. The plot takes some unexpected turns as the conspiracy of gryphon origin and the ring are brought to light. There are dragons, eagles, and wolf shifters all vying for Zoe’s attention. I can’t wait to read the next book.

I found no issues with proofing or formatting in this story.