Review: How the World Ends (Book Two) by Rudolf Kerkhoven 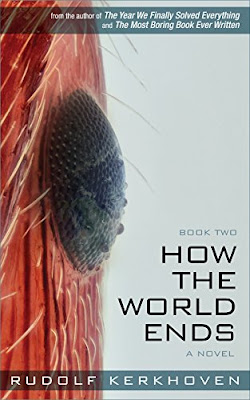 “The world has already come to an end. Now Hayden and four others—who might very well be the last souls on Earth—must contend with the notion that it may not be possible to know what happened on the 14th of August, 2007. Regardless of reasons, and against astronomical odds, they survived. But can survival be a means unto itself? Because if not, the cruelest fate might just be their perseverance.”

Those who read book one in this series will remember that it mainly dealt with the world (or at least the people in the world) mostly coming to an end. The small band of survivors were mainly focused on short term survival. In this volume, they’ve settled in, and the focus changes. For example, what worked to get food before (scavenging from stores and abandoned houses) isn’t going to work forever. Now that the immediate scare is over we’ve also got conflict and unresolved issues between the characters that are coming to the forefront. And then there is that mountain off in the distance that wasn’t there before. What’s going on here?

I find books like this to be a vicarious adventure, trying to figure out the solution to the problems they encounter along with the book’s characters. This series is built on a unique premise which has made figuring things out that much more challenging.

This is the second book in a series. While I think it could be read as a standalone, ideally a reader would read the first book first to fully understand what had happened to get the characters to this point.