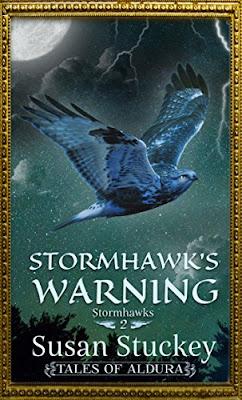 “The cruel and ruthless Chorkan, servants of the Dark God, have one obstacle in their path to conquest: a young noble in the Kingdom of Kier, Prince Kaden. Pursued by enemies and friends alike, while under a death sentence for a crime he didn't commit, Kaden seeks sanctuary with his old weapons master. He must find a missing princess, save his family, prevent a war and protect his kingdom, all while avoiding the executioner’s block.”

Always an avid reader, she wrote her first fantasy story on an Apple 2E – and lost it when the computer died. She resumed her affair with writing when the ‘nest’ emptied and has continued writing (off and on–usually off) until the present day.”

This is another excellent novella in The Tales of Aldura filled with drama, conspiracy, treachery, and mystery. Ranger Captain Kaden receives an unsigned warning message that declares him a traitor to be taken prisoner on sight and executed for murdering the Klatinan delegation. Not knowing who he can trust Kaden sneaks out of the Ranger Compound and heads to Stormmir to clear his name. As a fugitive he could do little to prove his innocence alone. He hesitates to involve his father, King Baelon of Keir, and brother, the Hereditary Prince, for fear his troubles would smear their name. Not knowing who to trust he turns to a retired Castle arms master and distant relative, Bralif, who does offer him a safe haven in a secret underground room leading to a web of tunnels under the town.

Gwaleth, a power hungry mage, seems to be the mastermind behind this conspiracy with secrets of his own. However, he has a partner who wants to be declared King of Keir and he is willing to kill the whole Baelon family to succeed. Kaden is hard pressed to find allies until he stumbles across a stranger wearing a green cloak while he is trying to elude the Kings soldiers. Kaden has little choice but to accept the man’s help.

The plot is fast moving, tense, and full of suspense as Kaden tries to unravel the secrets and mysteries of the conspiracy surrounding him. You’ll find double-crossing around several turns, powerful allies you didn’t expect, swordfights, and magic. There were also a couple of rare Stormhawks that were a pretty cool addition!

I would recommend reading Battle of Stryker Pass and On Treason’s Trail before reading Stormhawk's Warning. As far as the shorter stories, they will give you a feel for some more of the history of the land and its people.