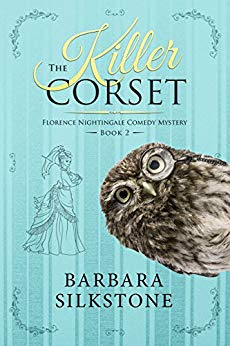 “When a Buckingham Palace lady-in-waiting is killed, Poppy Throckmorten is up to her crinolines helping her mentor, Florence Nightingale, solve the murder. But in tracking the clues, they uncover a plot to kill Queen Victoria herself!

Poppy must use all the detective skills she’s learned from Florence to foil the villains before the young monarch’s first meeting with her future husband, Prince Albert.”

“Barbara Silkstone is the best-selling author of both Regency Pride and Prejudice variations, including the popular the Mister Darcy Series of Comedic Mysteries, and Pride and Prejudice contemporary variations. All her books are light comedies based on Jane Austen's timeless tales of love denied and love discovered. ‘Feel good’ tales to warm your heart.

She is also the author of the Wendy Darlin Comedy Mystery series. Five coffee-snorting tales that combine cozy with outrageous adventures.

It’s been three months since Florence Nightingale, Poppy Throckmorten, and Granny (Mrs. Throckmorten) have returned home from their last mystery. Florence receives another letter from Buckingham Palace. Queen Victoria requires their service for a private matter. She especially mentions Poppy Throckmorten must attend as well. Granny jumps at the chance to join the girls’ as their guardian again.

As soon as they arrive at Buckingham Palace they are whisked straight to the Queen’s private parlor. It’s not long before the plot twists begin and continue to twist time and time again. As the mystery deepens it is not safe to walk the palace halls unattended. Moon, the footman Polly is smitten with, is never far away when she needs escorting. He also finds a private moment to profess his attraction to her. However, she is busy with the mysteries presented and she can hardly entertain a relationship with Moon until his social status is elevated. (Do you hear me, Queen Victoria?)

Florence has been called upon to apply her analytical instincts along with Poppy’s assistance to gather and explore the facts of a murder inside the palace walls. Poppy is learning from Ms. Nightingale by watching her dogged determination and attention to small details. Even Granny gets to stretch her acting wings, and does a brilliant job distracting by causing a ruckus at the dressmakers, giving Florence and Poppy time to snoop around. It’s all highly entertaining and smartly written. The reveal at the end is surprisingly complex with political ties. I think Queen Victoria will sleep a little easier.

I would be remiss not to mention the historical notes at the end of the book, which describes the real life characters in her story. However, Ms. Silkstone confesses she did take artistic liberties to create the story. The other supporting cast of the book are figments of her imagination.

The Killer Corset is book 2 of Barbara Silkstone’s, Florence Nightingale Comedy Mystery Series following, The Giggling Corpse. I do believe this book could be read as a standalone. However, some character development and nuances would be lost.