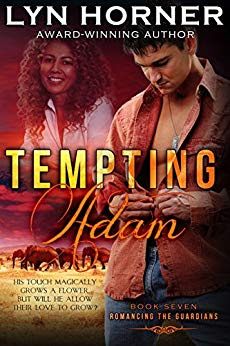 “He walked away from her once meaning to protect her and broke her heart.

Can she forgive him and overcome his stubborn resistance to love?

Guardian of Danu, Adam Dvorak has the power to make plants grow with a mere touch, but will he allow love to grow? An agronomist teaching better farming methods in a semi-desert region of northern Kenya, he has an accident and ends up in the local hospital where, to his shock, his former love Ellie Graham is a nurse. He’d never expected to see her again.

Ellie is equally shocked to see him. How could fate be so cruel, putting her in Adam’s path again? Her bruised heart tells her to avoid him, but circumstances dictate otherwise, and their mutual attraction soon flares to life. Will the temptation to accept Ellie as his mate conquer Adam’s fear for her? The High Guardian’s arrival and the pernicious Hellhounds may force him into a difficult decision as this saga builds toward a climax in the eighth and final book, A Might Chieftain.”

Adam Dvorak is a Guardian of Danu who has the power to make plants grow with a mere touch. He also understands the danger that comes with being a protector of his family’s ancient scroll. He has devoted his life to help desert area inhabitants develop profitable farm lands with their limited water supply. He is in Kenya in a remote village teaching and helping form crop terraces on the side of a small hill to increase crop yields. While in Kenya Adam is injured and knocked unconscious when moving a large boulder. Ikeno, his assistant and translator, and the farmer, Jebril, rush him to the nearest hospital.

Ellie Graham is a nurse in the small hospital. Two years ago Adam broke her heart by leaving her when he felt like being in a relationship with him could cause her harm. His intent was to protect her, but he wouldn’t or couldn’t explain to her why. When she recognizes Adam her heart is torn open again. She treats him while he is unconscious, but as soon as he awakens she changes schedules with another nurse to avoid speaking to him. However, he is crafty and sly and manages to find where she lives. He wants to apologize for the way he left her two years ago. Then he complicates their relationship again when he gets drunk and finds her at a tribal celebration with a man he doesn’t like. Yeah Adam is a mess, but a likeable character with baggage.

The plot is an emotional roller coaster as it twists and turns in unexpected ways. Ellie refuses to let Adam leave her behind again. However, she is in for a rude awakening when they are chased by the Hellhounds after Conn and Lara come to bring Adam back to the states to be with the rest of the guardians. Tension is ratcheted up as they are chased across the desert with very few places to hide. Back in the states the Hellhounds are quickly on their tail again, and are zeroing in on the Guardians’ hidey-hole. More hints are dropped about who has organized the Hellhounds. I also foresee that Lara will have some difficult decisions to make. The showdown between the Guardians and the Hellhounds is imminent. Better get ready to hold on tight.

Tempting Adam is book 7 in Lyn Horner’s Romancing the Guardians Series. This book does contain sexual situations that may offend some.