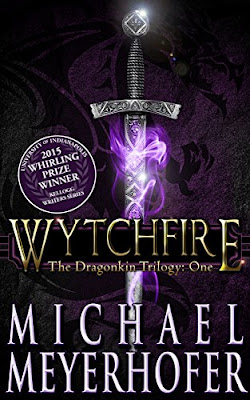 Rowen was kicked out of his knight’s training only to find himself alone on the road. Several strange encounters later, which are too much to be just coincidences, and Rowen is looking to lead an army of gang members, knights and citizens against an army fortified with a ghoulish demon they call Nightmare and sorceresses. Rowen must rely on the people he meets along his quest to aid him and save the city of Lyos from crumbling.

Michael Meyerhofer also writes poetry, publishing five poetry chap books, and has won awards for his work. He enjoys weight lighting, medieval weapons and history. Meyerhofer current teaches at Ball State University. You can learn more about him at his website.

In his acknowledgements, Meyerhofer refers to himself as a boyhood Tolkein fan. It’s obvious from reading Wytchfire where his inspirations came from by using multiple races that have to band together to fight a strong foe.

While the inspiration is there, Meyerhofer is able to make his own world using a rich history, reluctant heroes and a few surprises along the way

The book is the first of a trilogy and is set up that way. There isn’t a huge cliffhanger at the end, but more of the end of one battle while we know the rest of the war is ready to rage on.

Wytchfire may start off a bit slow, but the action picks up fairly quickly with Meyerhofer not dawdling too long to give the reader background information. He’s able to blend it into the story while continuing with the current action.

One of my favorite parts was the distinction of two strong female characters. They held their own against anyone who confronted them and were layered characters. My only gripe is that they are both, of course, easy on the eyes, which has to be noted by the men looking at them. It’s nice when I read a story where the men and women are described similarly without bringing beauty up when it comes to the women and not even mentioning that aspect when it comes to male characters.

However, Wytchfire is a great read for those who love epic fantasies – as I do. It certainly filled its role and feels like the start of a great adventure.

The first book of a trilogy.