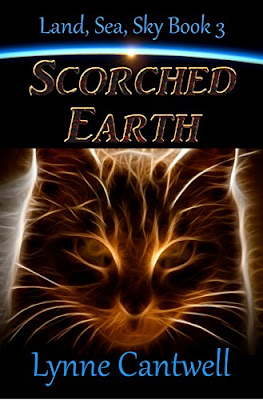 “Sue faces the biggest challenge of her career: she has three weeks to raise millions of dollars for research into a supergrain that promises to end world hunger. But ayalendo has some distressing -- even dangerous -- qualities. And Lucifer means to exploit them to control the world’s food supply and become a god at last.

When Tess learns the identity of the shady corporation pushing ayalendo’s development, she realizes her own livelihood may be in jeopardy. She and Darrell embark on a cross-country journey to her parents’ farm to gather information for a congressional committee investigating the ayalendo project.
The gods are bringing in some big guns to help. But it will be up to Sue, Tess, and Darrell to defeat Lucifer, once and for all.”

“Lynne Cantwell is a contributing author at Indies Unlimited where she shares her knowledge about Indie publishing and promotion. She has a master’s degree in fiction writing from Johns Hopkins University and is a former broadcast journalist who has written for CNN and Mutual/NBC Radio News, among other places. Ms. Cantwell currently lives near Washington, DC.”

Ms. Cantwell really surprised me with this series. She managed to get me interested in the political workings of our legislature using intrigue and underhanded politics. Setting up scenarios and relating how they realistically affect people’s lives and livelihoods when politicians get greedy. This plot revolves around Lucifer’s end game. He has been trying to gain enough followers to ascend to godhood and so far the gods have succeeded in keeping him out. In Crosswind he used race and religion to gain followers. In Undertow he used Americans’ fear of terrorists, and so far Tess, Darrell, and Sue, with their gods backing and insight, have been able to thwart Lucifer’s plans. In Scorched Earth, he seeks to control a new supergrain that could end world hunger with devastating consequences.

The plot moves swiftly as our trio of heroes uncover Lucifer’s plot. Tess and Sue both have personal stakes in the outcome, as well as the rest of humanity. Ms. Cantwell has done an excellent job weaving her story, which has a global impact, to relate it on a personal level. I thoroughly enjoyed the way the story was brought full circle, bringing it together with The Pipe Woman Chronicles. I had hopes as the story was unfolding that this would come to pass and Ms. Cantwell did not disappoint me. I do hate to see this series end and I am hoping these characters are still talking to the author so we will get more from them in the future. Well done, Ms. Cantwell. This has been a wonderful, unique series.

This is the third and final book in the Land, Sea, Sky series. Ms. Cantwell has included a synopsis for Crosswind and Undertow at the beginning of this book.  However, I think it would be beneficial to read both prior to reading Scorched Earth to fully understand all the characters.

I noticed no significant errors in editing or formatting.