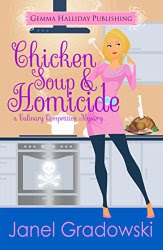 Janel Gradowiski is the author of three series in different genres. These are he Culinary Competition Mystery series, women's fiction in the The Bartonville Series, and the 6:1 Series, a set of themed short fiction. She lives in Michigan with her two kids and a dog.

A widely despised chef is murdered just before a cooking contest. A suspect in an investigation by an incompetent policeman takes it upon herself to solve the crime.

I have a fondness for mysteries and enjoy cooking, so I picked up Chicken Soup & Homicide with expectations for a fun read. I was largely disappointed. The story oozed onto the page like cold molasses as the author spent the first half of the novel dropping names of cupcakes instead of clues. The mystery itself isn’t developed until the second half of the novel and then is resolved quickly with the trite device of a confession as the killer holds the heroine at knifepoint.

The reasons for the murder are not hinted at earlier, so there is nothing for the reader to figure out. The characters were not fleshed out with quirks and idiosyncrasies that color the best cozies.

Attempts at humor were similarly flat.

“But even if Pitts was like a Greek god in bed, was the slimeball worth getting caught in attempted murder?”

The text is burdened with unneeded words.

“Disappointment tasted like a bitter aspirin tablet dissolving on her tongue with no water to wash it down.”

Perhaps that was an attempt to disguise the cliché “Disappointment was a bitter pill.”

“Holly plucked a square of tissue paper from a box on the showcase. She used it to pick up one of the cupcakes and place it inside a clear plastic clamshell box.”

Tells nothing more than, “Holly placed a cupcake in a box.”

“As she handed over her money in exchange for the cupcake, she tried her hand at being wise.”

Couldn’t we just say, “As she paid for the cupcake…”?

To the writer’s credit there are some clever or at least cute plays on the language.

"There was nothing like starting the evening out with a whine course.”
“…the noise was still at a frequency that would burrow into a dream and give a person nightmares about going to the dentist.”

“Snowflakes were materializing in the darkness and slamming into the glass. It sounded like a thousand mice toenails scratching, trying to get in.”

Even some good bits, however, could use an edit to pare words. “Snowflakes in the darkness slammed against the glass like a thousand mice scratching to get in.”

A few, but not enough to distract.