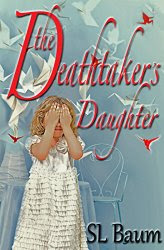 A former high school math teacher, S.L. Baum now works as a substitute elementary school teacher, chauffeur for her kids, and novelist. She lives with her family in the southwestern United States. She is the author of two series for the YA audience, The Immortal Ones and the Lush series (actually a serial with novel size installments). This book is the second installment of a third series, aimed at the new adult audience.

“Krista and Sam are raising their daughter, Eva, in Cedar Creek, while trying to keep their family secret from her as long as they can. As Eva grows up, she discovers that her quiet small town is never boring… especially after she finally discovers the truth. She comes from a family of Deathtakers.”

In The Deathtaker, S.L. Baum introduced us to Krista Vita and her special powers as a “deathtaker” (the ability to take away a person's death from disease at the last second, leaving them disease free). At the end Krista is pregnant with a daughter (all Vita woman have daughters). The Deathtaker's Daughter picks up the story of Eva, Krista's daughter, as she goes through childhood and discovers what being the daughter of a deathtaker means. (In case it isn't obvious, it means she'll be a deathtaker, too.) Eva's struggles to learn about her powers and the rules that she must live by is a great story, culminating in one of the most difficult decisions Eva will ever have to make.

I loved The Deathtaker and its premise. The Deathtaker's Daughter surpasses it. That's unusual for me as I normally like the first book of a series, getting to know the new characters and the rules they operate under, the most. Subsequent books are enjoyable for revisiting old friends, but without the same sense of discovery. This book stretched that initial discovery period for me as I learned more details along with Eva about being a deathtaker.

Although the second story in the series, I think the premise of a “deathtaker” is explained enough in this book that it could be read as a standalone. I'd still recommend reading the first book. If you like one, you'll like both, and reading them in order would be preferable while reading them out of order could spoil the first.

Review is based on a pre-release beta version, so I can't judge the final product in this area.