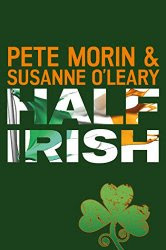 An attorney and former politician (he served three terms in the Massachusetts Legislature), Pete Morin lives on the coast south of Boston. When he isn’t writing or working in his law practice, you’ll sometimes find Morin hanging out with his guitar in Boston’s blues bars. Morin has one previous novel, Diary of a Small Fish, plus the former collaboration in this series with O'Leary, and a short story collection, also available. For more, visit his website.

A native of Sweden, Susanne O’Leary has spent most of her adult life as a globetrotter, moving from country to country with her husband, a former Irish diplomat. They’ve now settled in Ireland where O’Leary writes in many genres including chick-lit, women’s fiction (both historical and contemporary), mystery, and now thrillers. For more, visit O’Leary’s blog.

“When an immigrant Irish roofer plummets to his death from a South Boston building, lawyer Paul Forte steps in to settle the man’s presumably meager estate as a favor to his friend, Dublin reporter Finola McGee. A routine probate matter, he thought, until he discovers the penthouse condo, the top-of-the-line Harley and credit card statements reflecting a fondness for Las Vegas.

In Ireland, Finola’s human interest story about the tragedy prompts several Irish widows to inform her of similar accidents in the States. In each case, the laborers had been beneficiaries of CRAIC, an Irish 'charity' run by ex-politician Finbarr Murphy; their lives had been insured for substantial amounts; and their widows did not receive what they were due.

When insidious political forces (and a little blackmail) impel her editor to silence her, Finola smells another big story. She is convinced CRAIC is another word for scam.

As Paul and Finola team up once again to plumb the depths of Irish treachery, secrets are divulged, privileges violated, punches thrown, loyalties shredded and bombs ignited; but it takes a meddling amateur to unmask the saboteur.”

Once again, Boston attorney Paul Forte and Dublin reporter Finola McGee team up to get to the bottom of a cross-Atlantic crime. As with Full Irish, the first book in the series, this was a fun read. The scam Paul and Finola investigate seems plausible with tension increasing as they uncover the details of exactly what is going on.

One aspect of this series, setting it apart from a run-of-the-mill mystery or thriller, is the differences between the US and Ireland. These are an integral part of the story, giving these books a unique feel and perspective.

This is the second book in the series. Although I can see some advantage to reading the first book before this installment for a better understanding of the characters, I believe reading this book as a standalone would also work.

This review is based on a pre-release beta version. I can't judge the final product in this area.