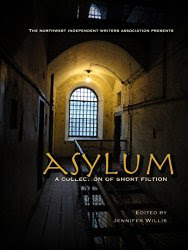 “A religious refugee fleeing for his life in his own country. A trickster asking an enemy for safe haven. A horrific visit to a psychiatric ward overrun by its charges. An unexplained theft from a biomedical lab. The last known survivor of a mysterious plague. A wormhole to the most peaceful and secret place in the world. A detective on the trail of a human trafficker.

What does asylum mean to you?

… seventeen authors explore the obvious and hidden meanings of this theme—from a werewolf on a mission and self-sacrifice in a post-apocalyptic world, to shadowy wizardry, a questing knight, and a gentle prison for geniuses.”

This anthology, sponsored by The Northwest Independent Writers Association has contributions from 17 different authors:

All of these stories were good with a wide range of genres including fantasy, science fiction, paranormal, and dystopian. I liked some better than others, but the reasons why were personal taste, not the quality of the stories. Two stories stood out for me which I'll highlight as examples. Coincidentally they're the last two stories in the anthology. Maybe I'm suffering from some form of recency bias.

Travail by E.M Prazeman is not the kind of story I'd normally gravitate toward. It's the story of Sir Brian Buldwen, a knight living in the kind of primitive medieval world you'd expect. It felt slow in the beginning, mainly because the author was establishing the story world and it isn't the kind of world that appeals to me. But I realized about a quarter of the way into the story that I was fully sucked in. I cared about Sir Brian and wanted him to succeed. I was amused by his jester friend, Pick. From the point I was hooked, I stayed that way. Part of it might be that the language used was modern without a barrage of phony (or maybe not) olde English words to keep reminding the reader we're operating in a different time.

The other story that stuck with me was The Last Refuge, a post-apocalyptic or dystopian story by William J. Cook. This story strikes close to home in our current political environment in the US as we follow Hamza, the Muslim main character, as he comes to terms with losing his family, a wife and daughter, and then discovers that his own survival is questionable. Luckily, just as in times past, even when it seems like the entire world has become evil, there are some who choose to do the right thing.

A small number of typos and copyediting issues.

Thank you for posting a review. I am happy that you enjoyed the short stories.

Thanks for dropping by, Ginger.

Thanks for the review. I also loved the second story you mention but haven't read the other. I'm sort of skipping around in there just enjoying the chance to read an entire story, start to finish, in my limited free time. Short stories are definitely making a comeback for me.

Thanks for the comment, Pam. I think with the advent of ereading that works of all kinds lengths are becoming more popular, especially those shorter than novels. The reason you give, having something bite-sized that fits better into limited time slots is one of the big reasons for this, especially those on the shorter end. (Not having to conform to the economics of paper production and distribution is another big one.)