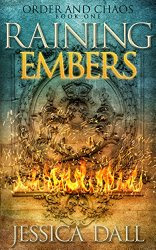 “Jessica Dall finished her first novel at the age of fifteen and has been hooked on writing ever since. In the past few years, she has published two novels, The Copper Witch and The Porcelain Child, along with a number of short stories that have appeared in both magazines and anthologies.

In college, Jessica interned at a publishing house, where her 'writing hobby' slowly turned into a variety of writing careers. She currently works as both as an editor and creative writing teacher in Washington, DC.

When not busy editing, writing, or teaching, Jessica enjoys crafting and piano, and spending time with her friends and family. She can most often be found at her home in Maryland with a notebook and her much-loved, sometimes-neglected husband.”

“Palmer Tash always follows the path of least resistance. He has an unusual disability involving his hearing. But in theocratic Latysia, being different isn’t a good thing, so he conceals his problem.

Brier Chastain’s malady is even more debilitating, and she often must take to her bed for long periods. Her days are spent in meaningless pursuits as she awaits an arranged marriage.

When Palmer and Brier are kidnapped on the same night, they meet and discover that their so-called disabilities are actually budding powers. They are the incarnations of Order and Chaos. With their country on the brink of war, the two must step into their predestined roles and learn to take control of their own destinies.”

Setting up a new world for a fantasy novel always takes time as well as introducing the main characters. What I saw in Latysia, was an old world setting much like earth. Palmer Tash was a ward of the church after becoming an orphan during the last reclamation war. He is an acolyte who is disillusioned with the church and is biding his time until graduation from the university part of his education. The Seers and Professors see a lot of potential in him. Tash is straight-laced and disciplined, whereas Brier is from a privileged family living in the palace. She spends her days getting drunk with friends, which helps with the rotting smell that seems to plague her days.

I was immediately drawn into the story, I seem to have an affinity for creation myths and this one takes the reader to the beginning of time. I enjoyed the juxtaposition of Order and Chaos. Having been thrown together Tash and Brier had to accept each other and learn to cooperate to survive. Here it is easy to see an undercurrent of a budding romance. Brier is betrothed to a man from home and Tash is all about following the rules so there are obstacles to overcome. Chaos is a powerful force and Brier seems to be coming to terms with the power. I felt like Tash is having a few difficulties dealing with his powers and got tired of his answer always being, ”I don’t know.” I do understand free will can change the course of fate, so perhaps there were too many branches to follow to determine the best outcome? It will be interesting to watch him grow more into his powers.

Raining Embers is the first book in the Order and Chaos series.

I found nothing of note with the formatting or proofing. 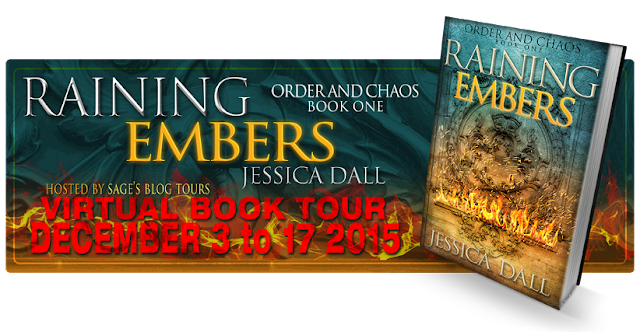