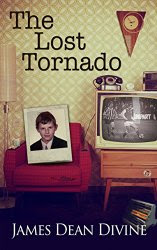 From an impoverished Edinburgh childhood, where Dad tapped the electricity supply from the street lamp outside their Pilton home to provide heat for the ten kids, to breaking into the altogether brighter lights of the advertising world, Jim Divine has seen off many a storm. His hilarious autobiographical novel recounts the highs and lows of a life spent searching for answers to the big questions: Will I be playing for Hibs on Saturday? Was that Joanna Lumley I spotted down Leith Walk? And just how the hell did I manage to avoid killing those three people?

James Dean Divine began writing his debut, The Lost Tornado, in 2009. One of nine siblings growing up in one of Edinburgh's less affluent areas gave Jim many stories to tell.

Jim always wanted to play for Hibernian FC and is now Creative Director at a marketing and advertising agency in Leith. He's been married to fellow athlete and former Scottish champion Trish since 1988.

You can learn more about the author at his website.
Appraisal:

Although I’m a people watcher autobiographies aren’t usually my thing. But then again The Lost Tornado isn’t your average self-assessment, either. The author grew up in a busy household and with a single minded ambition – to play football for his local team. The sport and Divine’s love for it cuts through the whole story. The trouble is Jim is up against it, given his background.

However, it is this background that gives The Lost Tornado its unique perspective. This novel is as much humour as it is autobiography, the ability to laugh through even the toughest of times, to make the best of the worst with a smile on your face. The hardest aspect of an autobiography is communicating this all in a way that first draws in then keeps them engaged. It’s tough, but no problems here for the author. It’s a difficult book to put down.

The author’s voice shines through loud and clear, he pulls no punches when describing his hardships and the local language in all its forms. This may put some people off, but for me it added depth and colour. Same with the characters that are all superbly drawn, three dimensional people that talk loud and clear in your head through the narrative.

Lastly there’s the environment itself. Lots of novels are set in Edinburgh (largely started by Ian Rankin, of course) but Divine shows another side of the city not seen elsewhere.