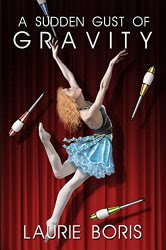 This is the first half of a doubleshot review. Check back late this afternoon for the second half where ?wazithinkin will weigh in with her thoughts.

A freelance copyeditor and regular contributor at Indies Unlimited, Laurie Boris is the author of six novels (plus this one makes seven) and a short story collection. Her book Sliding Past Vertical was the winner in the Contemporary Fiction category of BigAl’s Books and Pals 2014 Readers’ Choice Awards.

On the surface A Sudden Gust of Gravity is a version of the age-old dilemma of a woman with two men who want her and she can't decide. Like many common story plots, they've been done so often because they resonate with the readers. It is the kind of story that will never go out of style. However, this story is so much more than that.

The woman, Christina, has priorities that rank higher than finding or choosing a man. She has to deal with the past and also figure out how she's going to deal with her future, or at least how to get to the future she wants. One of the men has the same problems, dealing with a problematic past while grappling with what he wants his future to be. Throw in the other guy who is the apparent answer to at least one of Christina’s problems, throw in family and friends pushing and pulling the characters in different directions, and you're left with a tumultuous stew of a story with no idea where it’s headed.

This is a story that has appeal to women's fiction readers, but enough of an edge that thriller readers, especially those who like psychological thrillers, should find more than enough to keep the pages turning.

Thank you so much!

You're welcome, Laurie. It was a good read. Thanks for sending it to us.