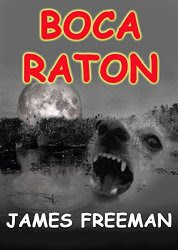 “Urban sprawl has expanded the South Florida populace right up to the boundaries of the Everglades, one of the most unique and forbidding wildlife refuges on Earth. Now there's a savage new predator loose out there, one that is motivated by hunger, and does not discriminate between species when hunting for prey. It lurks within easy striking distance of homes, schools, and parks and is nearly as fearsome as the sinister forces responsible for its being there.”

“James Freeman hails from a small town near the Great Smoky Mountains in Western North Carolina. Growing up, James was an avid reader and by second grade was going through his grandparent's encyclopedias between monthly issues of National Geographic and Reader's Digest.

After working as a musician, jet aircraft maintenance technician, and various roles within the broadcast television industry, James began writing in earnest. He has self-published a novella, Wise Man, and a novel, Boca Raton, and is currently at work on a new novel.”

The story starts with some interesting background on the history and geography of South Florida near Boca Raton—hence the title. Having traveled in that area on a number of occasions, I enjoyed how the author explained the population growth around the Everglades.

However, the novel itself didn’t capture my interest, in part because it is almost exclusively narrated, often from an omniscient point of view. This made the characters two dimensional and distant. In fact Frank, a driving instructor who is the main character through the first part of the novel, gets relegated to a supporting role once we meet Nate who spends his life obsessing about conspiracy theories.

Once the “Truther” Nate appears, the story revolves around him as he discusses some of the more popular American conspiracy theories (911, oil barons, the one percent etc.). This information is delivered through pages of flat dialogue which is received by the other characters with gasps of wonder and no opposing viewpoint.

The plot is scattered and uneven with potential dangers introduced for no apparent reason because they just disappear never to be mentioned again.

Black helicopters, black SUVs, and a stereotypical military “higher up” are assumed to be controlling multiple conspiracies, most of which fail to materialize or have any direct connection to the plot.