Review: A Danger to God Himself by John Draper 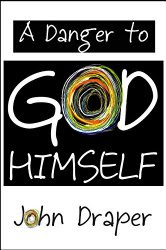 “Mormon missionary/onetime hedonist Kenny Feller has realized that God isn’t about to give him an ounce of the miracle power he needs to succeed on his mission—as promised. What’s more, he’s concluded that, frankly, people aren’t worth the trouble. Then his new junior companion shows up—the wisecracking Jared Baserman—and immediately starts hearing heavenly voices and seeing fantastic visions. For Kenny, it is immediately clear that God has sent Jared to propel him into Mormon Manhood.

But Kenny’s not the only person who takes note. Interests both virtuous and malevolent cozy up to Kenny and Jared, eager to make use of Jared’s gifting. At first, Kenny takes this as a sign that his perceptions of Jared are spot on. God is using Jared.

But something’s not quite right.

Specifically, why in the hell would God choose someone as slope-shouldered as Jared—someone so unreligious, so strange—to be a channel for His supernatural power? He doesn’t even read the Book of Mormon. Plus he smells funny. As their tracting grows fruitless and Jared’s messages grow more bizarre, Kenny begins to wonder: Is Jared really touched by God?

And, if so, does God know what He’s doing?

A Danger to God Himself is a scathing takedown of religious certainty, a life-affirming tale set in 1970s Washington state—equal parts spiritual road map and coming-of-age tale.”

A fulltime writer his entire adult life, newspaperman John Draper always wanted to write a novel. But between work and family obligations (he has three kids), he was half a century old before he was able to find the time to start. A resident of Washington state, this is Draper's first novel.

Sometimes when I sit down to write a review I have multiple directions or slants to go with my write-up. It's paralyzing, not knowing where to start. This is one of those times. As with anything too complicated to wrap your mind around at once, the best approach is to break it into pieces. So that's what I'll do here, starting with a focus on the basics of the characters and the story, moving into the religious aspects, and finishing off with my ruminations on the kind of reader who I think would be the most likely to enjoy A Danger to God Himself. I expect a lot of words will be spilled.

The main characters are great. Kenny, a young adult (which we all know is still just a kid) who does what's expected of him, even if maybe he'd rather not. He's a type we've probably all seen, even if the situation is different. His missionary companion, Jared, is a strange duck, keeping the reader off balance, not sure what to make of him. In the beginning, he provides comic relief, but he also drives much of the story.

The secondary characters are all well formed as well, each helping move the story forward. I especially liked Jared's dad and sister who were integral to the story and to gaining a complete understanding of Jared. Some of the characters are caricatures, not in the sense that they aren't well formed or are flat. More in that they may seem just a touch over the top, which is fitting for a story that is satirical.

The story is satirical in a couple ways. One is that it satirizes religion, especially those who take what many consider to be myths containing lessons to help in living a good life and interpret them too literally. But on another level, Jared and everything that happens to him is a satire of Joseph Smith and the founding of the Mormon church.

Which is a segue into the religious part. Those not familiar with Mormonism might wonder how much of the story is realistic. The answer is that while satirical, nothing here is out of the realm of possibility. In fact, Mormonism has a long history of spawning splinter groups that go way beyond the mainstream church. Even within the mainstream, the culture rewards followers and extremism while discouraging critical thinking or questioning of any kind.

That last part is a clue of who this book isn't for. It's doubtful a devout Mormon has read this far unless it is one of my still-faithful sisters, wondering how far I've gone this time. This isn't the book for them. However, anyone without a problem with taking a critical look at religion, regardless of their personal beliefs, will find much to like. I'll end this with a quote from the book. If you read this and give a knowing nod, it is especially for you.

Mormonism isn’t just a religion. It’s a way of being. Like alcoholism, I guess. Alcoholics say they never stop being alcoholics, don’t they? They’re always recovering alcoholics. Same thing with Mormonism. It’s a culture. If you’re born a Mormon, you’re always a Mormon—more so if you were actually raised in the church.

A small number of typos and copy-editing misses.