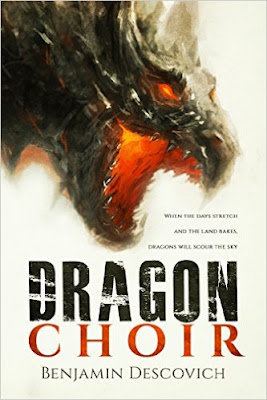 Description:
“Prepare yourself for a fantasy romp of epic proportions. When the days stretch and the land bakes, dragons will again scour the sky.

Author:
“Benjamin Descovich is the founder of ethicalwriter.com and works every day writing the seeds to grow a better future. He is a passionate environmentalist, social justice advocate, and holds a degree in Political Science. Born in Australia and well-travelled through Europe and Asia, he has been spoilt with inspiration for his fiction. While the dramatic landscapes, political intrigue and epic battles will captivate your imagination; the dragons and magic take your breath away.” Learn more about him at his website.

Appraisal:
Elrin is a young man, not yet twenty, trying to find his way in the world without his father. He’s currently serving as a messenger between a priest he trusts – Herder Kleith – and the Guild Master. Nosing around the Guild Master’s study, waiting to deliver a missive, Elrin picks up a mysterious dagger to study. When he overhears secrets between the Guild Master and an unknown source his life is suddenly in jeopardy. Narrowly escaping the Guild Guards, Elrin flees to Kleith who dresses Elrin in priests robes and sends him across land and then to the Hoard Islands to seek the Dragon Choir for help. Kleith is unable to see the dagger in Elrin’s possession, but knows it well. It belonged to Elrin’s father, Arbajkha, who has been missing for over half of Elrin’s life.

Thus begins this rip-roaring adventure full of intrigue and espionage between political and religious leaders who wish to hold power over all the surrounding nations and the sea. Elrin inadvertently ends up with an eclectic band of diverse rebels who wish to free the Jandan slaves and restore justice to all. As with every epic fantasy there are many characters, but I found each one fully rounded and unique. I had no trouble liking or identifying with all of the heroes. The bad guys were the most vile ever to live. There are epic battles with swords, magic, and arrows on land and cannons with black powder at sea as pirates join in for their share of the spoils while still aiding the rebellion.

Format/Typo Issues:
No significant errors, except for the one time Elrin was called Erin. You wouldn’t think that would throw me out of the story, but it did catch me off guard.

Posted by BooksAndPals at 6:15 AM

Thanks so much for you amazing review,?wazithinkin.
You've made my day!
P.S. I've uploaded new copies of Dragon Choir with that typo you mention fixed. Ghaaaa. How do these things slip through. Much appreciated that you picked it up.
All the best,
Benjamin Descovich

You are welcome, Mr. Descovich. I look forward to your next book in this series. Thank you for dropping in and commenting. :)