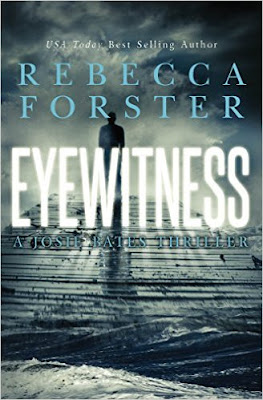 Description:
“Blame is in the eye of the beholder when Josie faces her toughest challenge yet – one that comes from halfway around the world and forces her to question her faith in justice while threatening the people she loves most.”

This is book #5 in The Witness series featuring attorney Josie Bates.

Author:
Best-selling author Rebecca Forster has had more than twenty books published in her career, most legal thrillers.

Appraisal:
I’ve read three of the four prior books in this series and although having done so isn’t a prerequisite to understand or enjoy this book, when I evaluate why I liked it, one of the biggest reasons are the characters, specifically Josie Bates and her foster child, Hannah. Eyewitness can be read as a standalone and Forster introduces the bare bones of their back story, but I couldn’t help wondering if doing so wouldn’t be missing out on some of what I saw and felt, having made the previous investment and having the deeper understanding of the characters that I had coming in. Josie is an attorney and the books in the series are legal thrillers, yet they have more heart than the typical book in this genre, largely because the legal conflict is usually much more personal for Josie.

In this installment, that personal stake is because her client is Billy Zuni, a friend of Hannah’s who has been a secondary, but far from trivial character in previous books. As Josie digs, she discovers that much of what she thought she knew about Billy wasn’t quite reality. This is also unlike a typical legal thriller because of the way it weaves elements of a foreign culture and how that can influence the life of US immigrants into the story. I highly recommend this book for fans of legal thrillers. Even more, I’d recommend backtracking to the first of the series and reading them all.

FYI:
Although the fifth book in the series, this can be read as a standalone.
Added for Reprise Review: Before Her Eyes was the winner in the Thriller category for 2014 Readers' Choice Awards at BigAl’s Books and Pals. Original review ran April 17, 2013.

Posted by BooksAndPals at 5:58 AM