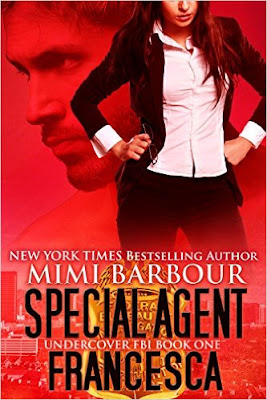 Description:
“Violence, suspense and sizzling romance heats up Special Agent Francesca’s humorous journey fighting off the mob! Dr. Sean Collins wants to tame her! Yeah-like that’s gonna happen. Only one thing keeps Francesca motivated. Proving to her mother, the FBI “Snow Queen”, that working undercover is where she belongs.”

Author:
Mimi Barbour is a “New York Times, USA Today, and Amazon best-selling author who's sold over 500,000 copies of her books world-wide. Her five romance series: The Vicarage Bench/ time travel at its best, Angels with Attitudes / angels love romance, Vegas / fast-paced plotting, Elvis / make a song a book and her newest, Undercover FBI / with sizzling conflicts and lots of humor.”

From Smashwords: “My husband is supportive and drags me out to feed me and plans occasional forays into the outside world. I have a son who makes me happy I was born a woman so I could be his mom, and a niece whose family adds to my full cup of happiness. Gardening lights my inner fires, and I need no urging to get out into the yard when the weather dictates. I do have many hobbies such as quilting, crocheting, but alas – no time.”

Appraisal:
Special Agent Francesca Donovan was thrilled to be moving to the Las Vegas FBI branch to escape her powerful, domineering mother. Kathleen Donovan held the position of Special Assistant to the Director of the FBI in New York City. She had always made sure Frankie was assigned soft cases. So when a position in the bureau opened in Las Vegas, she jumped at the opportunity to move more than halfway across the country. Frankie chose a hotel away from the glitz and bright lights of Vegas to familiarize herself with the underbelly of the city. On her first night in town, before Frankie checks in with the bureau, she gets between the hotel owner and a couple of goons who are out collecting protection payments in the seedy area for their boss.

Craving the chance for real undercover work, Frankie grabs at the opportunity to be involved in cleaning up gang corruption in the nasty neighborhood. In the sting operation, to lure out a Vegas kingpin, she is to pose as the new hotel owner along with Sean Collins, a Psychiatrist and LVPD Profiler, as her loving fiancée. But first Frankie needs to approach a father she’s never met, a man who doesn’t even know she exists.

Frankie is a wonderful character. While she doesn’t have an outgoing personality, she is feisty, smart, and confident in her abilities. She is also multi-talented and doesn’t shy away from danger. There is an undeniable chemistry between Frankie and Sean. I enjoyed the way Ms. Barbour played with each character’s perceptions of the other while they explored and came to terms with their own feelings. Neither can deny their attraction to the other and as the danger intensifies, the stakes get higher.

The characters are all well developed and diverse. The storyline is a rollercoaster ride that will keep you enthralled as Frankie dives head-first into trouble trying to prove her worth to her profession and her mother. I think readers will find this an intense but enjoyable jaunt into Francesca’s journey.

Posted by BooksAndPals at 7:52 AM

great review!! I also enjoyed this book. Can't wait to start the next one!
Traci

Thanks so much for reviewing my book.

Thanks so much for reviewing my book.

Thank you all for dropping in and commenting. Jbiggar, I hope you enjoy Special Agent Francesca as much as I did.

Ms. Barbour, I especially want to thank you for dropping in and commenting. I do appreciate it. :)