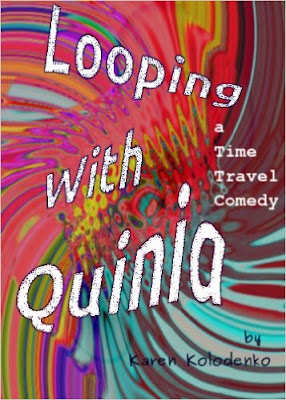 Description:
When eccentric barista-cum-inventor Quinia Schmul casually tampers with time while babysitting, she discovers some disturbing truths about time looping and, as it were, spaghetti.

Philosophy student Rand wants nothing more than to finish studying for his final exam, but his girlfriend has other ideas. Quinia is working on a time looping mechanism designed to give everyone more free time. He predicts disaster, and of course he's right, but what he doesn't expect is the scale of the problem and how reality can become quite so skewed.

Come along on a new kind of time travel adventure - a dizzying ride filled with coffee, domestic disasters and logical paradoxes.”

Appraisal:
This is a quirky little story. It was dizzying and lots of fun. Rand is head over heels in love with Quinia and her head full of curly red hair. She may be a bit ditzy but she has something working for her in that odd head of hers. Rand must have thought so too. Uncomfortably beyond his twenties he deserted a lucrative job in software support to take a doctorate at a university big on theory and small on practical applications smack in the middle of a global economic depression. He felt certain that society was shifting towards a new philosophical approach. So he is now studying a new specialty field called foremodern philosophy.

With no real scientific theory education Quinia loves inventing and dabbling in quantum mechanics, random probability, and magic. At the moment it is the theory of time that she is trying to manipulate. Is it linear, circular, or squiggly like spaghetti? The biggest problem is she knows just enough to get herself in trouble. Especially when she factors in paradoxes. It is all utter nonsense but Quinia adores nonsense and is able to pull Rand along with her random logic that he can almost follow.

It was fun trying to follow along with the dialogue between Rand and Quinia. If you enjoy quick quirky reads that will leave you spinning and questioning reality, this may be a story you will enjoy.

Format/Typo Issues:
I came across no issues with proofing or formatting.

Posted by BooksAndPals at 9:00 AM