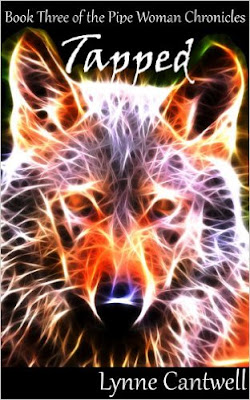 Description:
“Naomi Witherspoon, chosen by a Lakota Indian goddess to mediate a truce in heaven, is in the midst of a number of down-to-earth problems. She hasn’t heard from her boyfriend, Joseph, in weeks. She has also been attacked recently by a man channeling an Aztec jaguar god. Her best friend Shannon thinks she ought to get out of town for a while – but what Shannon proposes is a road trip to the Pine Ridge Indian Reservation to track down Naomi’s father, who doesn’t know she exists. Naomi agrees to go, but the additional stress literally makes her sick.”

Author:
Ms. Cantwell is a contributing author at IndiesUnlimited where she shares her knowledge about Indie publishing and promotion. Her Pipe Woman Chronicles include four volumes to date Seized, Fissured, Tapped, and Gravid. She is now working on the fifth book in this series Annealed. You can connect with her at her blog or on Facebook.

Appraisal:
I am inexplicably drawn to Native American stories and wolves. This story has both and so much more. As we join Shannon and Naomi on a working vacation, we are educated about the Pine Ridge Reservation, the battle at Wounded Knee, and how the wolf works in the Lakota tradition. I thought it all blended well as Naomi starts to feel connected to her own Native American roots. It is a heartwarming journey as she gets to know her extended family and we get to see into the process of her new mediating vocation as it is implemented into the judicial system on the reservation. She is excellent at her job, the Goddess has chosen well.

FYI:
Tapped is Book three in The Pipe Woman Chronicles series.
This book contains adult language and situations that may be offensive to some.

Format/Typo Issues:
Excellent editing, I found no issues with editing or formatting.

Posted by BooksAndPals at 11:28 AM

Thanks so much for the reprise review! :D

:D You are welcome! These reprise reviews are great about highlighting some of our favorite books we have reviewed in the past! Thanks for dropping in and commenting, Ms. Cantwell.