My Father’s Son by Andy Symonds 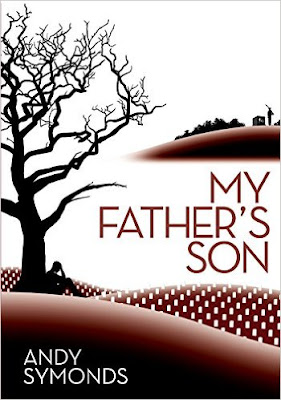 Description:
“When Nathan's father, a decorated Navy SEAL, is killed in combat, he must rely on his father's teammates for direction as he learns to become a man. The normal struggles of adolescence are amplified while growing up in the shadow of a war hero, and a young man's future hangs in the balance. No one is safe from the scars of war in this funny, heart-wrenching, poignant novel.”


Author:
“Andy Symonds is an award-winning journalist based in the Washington, D.C. area. His father is a thirty-three year veteran of the U.S. Navy, and he grew up on military bases throughout the world.

He is currently working on the follow up to My Father's Son, which will feature several of the same characters.

His passions are: writing, reading, Boston sports and supporting our veterans.”

To learn more check out Mr. Symonds website and feel free to check out My Father’s Son Facebook page as well.

Appraisal:
I very much enjoyed the way this story gave insight into the navy SEALs, exploring far beyond their actual duties and delving deeply into the men’s personal camaraderie and ethos. On a number of occasions, the author used an unusual mechanism to give the reader an insight into the SEALs in combat, telling the backstory using multiple points of view, separated out from the main story using italics—the technique worked really well.

However, the tale is structured around Nathan’s coming of age, tracking his life from his father’s death, when Nathan was thirteen until the boy reached eighteen, and told in the form of a first-person biography. For this reader, there were too many words spent examining Nathan’s self-destructive behaviors, which were visited, then repaired, then revisited, only to be fixed and revisited again. I found a fundamental disconnect between this young man’s weak character and that of the navy SEALs who selflessly supported him after his father’s death and whom he hoped to emulate.

At one point in the story Nathan addresses the reader directly, which threw me off, especially considering the reader was told that certain information about a significant object the main character held in his hand would not be revealed. If this is a work of fiction, I fail to understand what purpose that achieved other than to tick me off!

Overall, I felt unsympathetic to the main character. Based on the information I was given about the rigors of SEAL training, I found it hard to believe Nathan would qualify. Consequently some of the enjoyment I gained from the clearly well-researched military aspects was dampened by Nathan’s self-absorption and selfishness that seemed to stray beyond “normal” high school rebellion into the realms of a mental dysfunction that I would hope the six month SEAL training would expose.

Posted by BooksAndPals at 8:37 AM