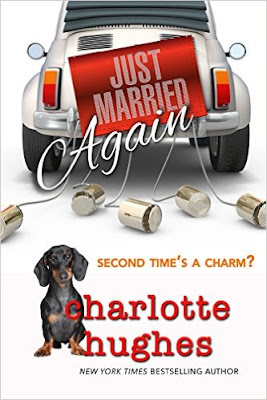 Description:
“The last person Maddy Kelly expects to show up at her mountain cabin for the holidays is her soon-to-be ex-husband, who was always too busy to enjoy their hideaway. Following doctor’s orders to reduce stress, Michael arrives at their remote cabin, unannounced and unexpected, in the dead of night, during a snow storm. Which is why Maddy greets him with a fire poker to the head, rendering him unconscious, and with a case of temporary amnesia. As his memory returns, Michael realizes how much he loves his wife, and is willing to do anything to get her back, even if it means pretending to still have amnesia.

Add to the mix Michael’s mischievous 13-year-old nephew, who has stowed away in Michael’s car, and Maddy’s two dachshunds who take an instant disliking to Michael, and you have a laugh-out-loud recipe for a romantic romp.”

Author:
Charlotte Hughes was raised in the South, the oldest and only daughter of three children. In college she majored in communications. Having had a successful run as a traditional published author Ms. Hughes has now started releasing some independently published romances. To learn more about her visit her website.

Appraisal:
I found myself wanting a light, sexy read and Just Married Again sounded like it might satisfy my itch. Maddy and Michael have been separated for ten months. Their well-meaning, private physician plants a thought in each of their heads that they need to get away to their mountain cabin for some rest and relaxation over Thanksgiving. Did he know they would both take him up on his suggestion? Did he realize there was a huge early snow storm moving in that would leave them both stranded there in the mountain wilderness? I am pretty sure the doctor didn’t know that Michael’s thirteen year-old nephew, Danny, would stowaway in Michael’s car when he headed for the rustic mountain cabin.

I found this an engaging read as we learn the backstory of Maddy and Michael’s breakup. Having Danny stranded with the couple was a clever trick to force both Michael and Maddy to keep their tempers in check. Danny also set up a base for the innocent reality of their situation. I enjoyed having both Michael’s and Maddy’s perspectives voiced. While Maddy is trying to protect her heart from further heartbreak, Michael is trying to figure out how to get back into Maddy’s good graces. Add in the antics of Maddy’s two dachshunds, Rambo and Muffin, and this ends up being the perfect storm; Michael doesn’t stand a chance. The comedy of errors that ensues keeps the mood light as these two learn to communicate and respect each other again.

I think Ms. Hughes was able to strike a nice balance between seriousness and folly in this story.

Posted by BooksAndPals at 6:22 AM