The Lion of the Cross: Tales of a Templar Knight by @Author_TMCarter

We welcome Judi Moore to Books and Pals. Judi is a new Pal on Big Al’s team. She lives in Britain, writes professionally, and until recently was a university lecturer in Creative Writing. She enjoys reading historical fiction, SF, mysteries, and thrillers; also poetry, biography, and history (believing one cannot write plausibly about the future unless one has some understanding of the past). 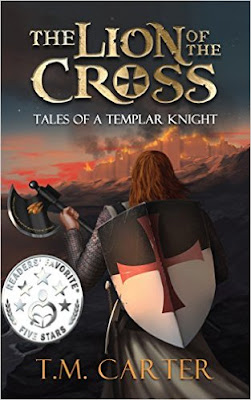 Description:
“What if you had to flee your homeland, abandon your faith, and become the enemy you were sworn to annihilate, just to survive?

William de Scotia’s gentle blood flows with the ancestry of Scottish Kings and the malevolent taint of the murderous Lion of Islam, Sultan Baibars I. Born to an innocent mother, who was stripped of her nobility and dignity, then sold into bondage by a diabolical Genoese slaver, William is the lesser son of the Mameluk Sultanate and fated to be his eldest brother’s elite guard. When his barbarous father is suspiciously poisoned, his eldest brother ascends the throne and William prepares to embrace his destiny. But when one is young, the future is but a mirage in the desert—cruel and deceptive.

William is forced to flee his beloved Cairo when an ambitious emir, Qalawun, and his cunning son, Khalil, overthrow his brother. With the aid of a mysterious Templar Knight, he escapes to the Christian stronghold of Acre. A fugitive orphaned by fate, William must enter life’s crucible and become more than just a boy.

Through the eyes of a boy, The Lion of the Cross: Tales of a Templar Knight transports you through actual events of the 13th century, an age in peril, where a delicate peace between Christians and Muslims exists and hangs on a precipice, and holy war is sermonized from minarets and pulpits.”

Appraisal:
If you have ever wanted to know what the Crusades were all about – or if you want to know more – then I think you will enjoy this book. Mr. Carter is steeped in the Crusades to the extent that there are footnotes (unusual in a work of fiction). The voice of Wasim/William is good – the boy is arrogant, petulant, and humble when he remembers to be, and easily motivated if his interest is aroused or he finds someone he can look up to. As the boy grows, the voice changes to that of a young man wondering what he may reasonably expect from a life lived in immensely violent times.

There is a slightly quaint turn of phrase used to give a flavour of the period, which I felt worked well. For example, when they genuflect Mr. Carter has his knights ‘take a knee’. The intrigues between the various Orders of Knights, and the battle scenes (which increase in number as the book comes to a climax) are well told.

I was struck by the similarities to our own world (Christians and Muslims at loggerheads) and how little has changed in some ways. I was also struck by the futility of the Crusades in general, fighting back and forth across a few square miles of desert, soaked in blood; something that Carter captures poignantly.

The author has never met a qualifier he doesn’t like. Sometimes these qualifiers enable him to show nuances of his setting or the mindset of his protagonists to greater advantage. Sometimes the highly-coloured description leads the reader to mistake something trivial for something important. And sometimes the qualifiers slow the pace. There is a crowd of players in this novel (they are listed at the back, helpfully!) and a goodly number of different places too – so it is unkind to confuse the reader, who is already working hard.

The first chapter has nothing to do with anything else in the book. I mention this, as it was some time before I gave up trying to tie the two stories together. This is the first volume of Tales of a Templar Knight; two others are planned: it is to one of them that Chapter 1 belongs.

Despite the caveats above and below this is an exciting read, which gathers pace as it unfolds.

Format/Typo Issues:
There are some typographical and grammatical infelicities, sadly – despite the copy editor being name-checked in the prelims. E.g., right at the beginning: “This is a work of fiction – although some of the characters and events portrayed in this book are fictitious, and any resemblance to real people of events is purely coincidental – this work is based on actual historical events and persons”.

In some sentences a scattergun approach to commas means the reader must work hard to decipher what the author is getting at, e.g. “I feared, for the man for it did appear to me that Al-Ghazi was bearing down on him at lightning speed …”

Posted by BooksAndPals at 9:23 AM

Email ThisBlogThis!Share to TwitterShare to FacebookShare to Pinterest
Labels: 4 Star, Historical Fiction, The Lion of the Cross, TM Carter

Welcome Ms. Moore! It is nice to have you on board.

Welcome to the mad house, Judi! You have set yourself a high bar with this well reasoned appraisal. I look forward to many more... Pete

Thank you both. I'm enjoying the process very much so far.

Thank you both - I am enjoying the process very much so far!

Something a bit odd appears to have happened to the title of the review?