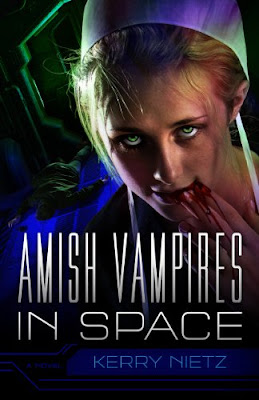 A planet settled by an Amish community is in imminent danger of being destroyed because its sun is about to go super nova. The Amish are rescued by a Guild transport ship. The story takes place on the ship as it voyages to the new Amish planet.

Kerry Nietz is a refugee of the software industry. He spent more than a decade of his life flipping bits, first as one of the principal developers of the database product FoxPro for the now mythical Fox Software, and then as one of Bill Gates's minions at Microsoft. He is a husband, a father, a technophile and a movie buff. He has one non-fiction book, a memoir entitled FoxTales: Behind the Scenes at Fox Software. His first novel, A Star Curiously Singing, was published in October of 2009.

Before I get to the story, which I enjoyed immensely, I have a few comments about the presentation: I would never in a million years read a book with such a cynical title. And as for the old saying—never judge a book by its cover, well that has probably never been truer. I don’t enjoy vampire stories, either. No. The only reason I selected this story was because I’ve read two of Mr. Nietz’s previous novels and enjoyed them both. There is a reason behind both the title and the cover. It’s explained by the publisher at the beginning of the book, and if you’re interested, you can read about it in the Amazon sample.

So, to the story: as the title implies, there are three threads to this novel.

Amish—the story begins with the Amish community, and the author achieves a brilliant piece of world building in this section. I was sucked in and enthralled with the characters and traditions on display.

Space. Yes, despite the title, this is a sci-fi novel, and the space ship (transporter) was fascinating—a second world successfully built by Mr. Nietz including the characters who ran the ship and a nicely nuanced love story to boot.

Vampires. Well, yes, but from a sci-fi perspective without the usual paranormal BS that annoys me like fingernail scratches on a chalkboard.

The threads were pulled together beautifully. The read was fast, the writing sharp and easy on the eye, the characters all worked and made sense. Tension was maintained right to the end. I can’t believe I’m typing this, but— I highly recommend Amish Vampires in Space.