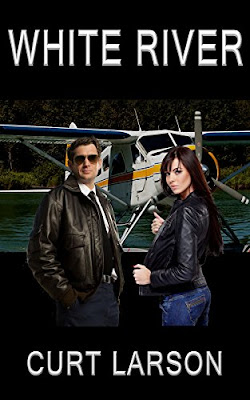 An EPIC Award finalist for 2016, White River takes you into the pilot's seat for a swashbuckling adventure in the skies and on the ground.

He landed every pilot's dream job, flying a seaplane in the wilds of Canada. It was working out pretty well, until he landed smack in the middle of espionage, 21st century style. Bad luck finds him as every turn of the propeller gets him deeper and deeper into trouble, until not only his survival but the survival of the girl is at stake. Does he have what it takes to navigate his way out of this one alive? And dare he trust the girl?

Born and raised in metro Detroit, Curt Larson started his professional career as a draftsman, quickly graduating into engineering where he was one of the pioneers of a new engineering technology, Dimensional Management. He prides himself on having a hand in the Dodge Viper and Ferrari F360 Modena, among other more mundane vehicles.

In the 1990s he started writing novels and short stories when the whim arose and found them much more interesting.

I recently read and reviewed Yukon Audit by Ken Baird. So this is the second novel I’ve read that features a DHC-2 Beaver fitted with floats for water landings in the wilds of Canada. This plane certainly has a strong emotional connection for pilots and engineers. Apparently pilots will doff their caps at the sight of one. If you know what I’m talking about, you can quit the review right here and go buy the novel--you’ll enjoy the tale. Heck buy them both.

For this reader, the plane doesn’t have an attraction, so I found some of the finely detailed descriptions of its working and its handling a little long winded. I didn’t feel that way with Yukon Audit, but maybe I’m just “Beavered out.”

While the action was taking place, the story moved along a decent clip and was interesting enough, but that only covered three-quarters of the book. The last twenty-five percent dealt with “here’s how all the characters ended up,” and that section got really slow. It’s not an uncommon trait in thrillers, especially when a gorgeous woman who is totally out of the reluctant hero’s league is involved. Oddly enough, that same scenario was present in Yukon Audit (both women were NYC models). Probably a coincidence and not at all connected with the plane’s nickname, I’m sure.

Overall, this was a fast, easy read. The main character was well drawn. Pete, his plane’s mechanic, was a lot of fun. Pete’s dialogue was written colloquially, and it worked well--not an easy feat to accomplish, so kudos, Mr. Larson. The bad guys were somewhat stereotypical and the nefarious deed they were planning was glossed over. For a thriller, I found the story lacked tension. I never feared for the hero or expected him to suffer serious injury or to fail to thwart the bad guys. I expected him to rescue the gorgeous gal. And I didn’t much care for the pages that came after the “Thrill was gone.”