Review: Kevin The Vampire by Will Madden 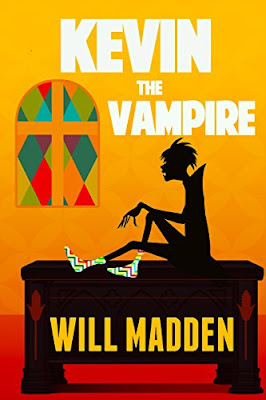 “Back in the 1980s, Kevin hoisted a firebrand to bad-assery as a new vampire outside the punk rock clubs of New York City. These days, he’s retreated to rural Ohio, where he lazes around an abandoned church, playing the organ and dreading the taste of the corn-fed locals. One night, a vampire hunter breaks into his sanctum bearing worrying news: another of Kevin’s kind has concocted a plot to turn the whole world into a hell for living and undead alike. The hunter proposes an alliance to destroy this rogue vampire, but Kevin suspects his would-be ally has at least one secret he isn’t telling.”

“Will Madden is a Nashville based author, originally from the Bronx, New York. He holds a degree in something ridiculous from a fancy institution of higher education. By day he performs menial labor so that by night he has enough brain power to deliver the hard-hitting truths about the struggles of imaginary monsters. His name is only slightly less unGoogle-able than Pat Downs…”

Kevin The Vampire is Mr. Madden’s debut novelette. To learn more check out his webpage.

I found Kevin the Vampire a smartly written novelette with a unique plot. Kevin faces the dilemma of a scheme which may or may not be the rantings of a madman. Kevin has known Crackle for years, he’s an old vampire who has tested his skills beyond its measure, perhaps to his mental deficit. Grackle, posing as a vampire hunter to the human world, has come to recruit Kevin to mount an assault against a plot to turn the whole world into a hell for living and undead alike. Grackle has an extensive battle plan and Kevin must decide whether to join forces with him or not.

Kevin has found himself a nice little existence in an abandoned church in rural Ohio. He’s not lazy, he redecorates his surroundings regularly by painting the icons with nail polish in gauche colors. He also repaired the organ so he could play Billy Joel songs. He is also smart, has a wicked sense of humor, and a conscience.

I enjoyed the complex storyline and watching the verbal sparring match between Kevin and Grackle. It’s going to be interesting to see what comes next. While the ending came to a satisfying close, I’m sure we haven’t seen the last of Kevin.