Review: Murders at the Fountain of Youth by Kevin Douglas Wright 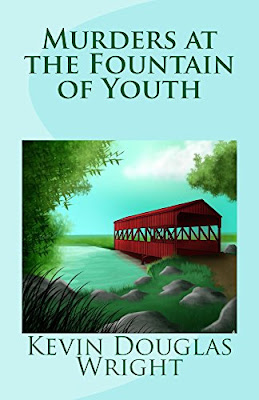 “What do you know about The Fountain of Youth? Did it really exist? Discover the story behind the Fountain of Youth. Where was it? Where is it today? Take a trip back in time. This is the story of a struggling private investigator hired to solve a murder mystery, challenged to be fair, and trusted to save a village full of innocent people including her daughter.”

There are two good things I can say about Murders at the Fountain of Youth. The first is that whoever proofread it did a good job. I only spotted a couple minor issues. The second good thing is, it was short. That's it.

Sometimes the writing is okay. Some of the story works. (That's lukewarm, right?) But there were also a lot of things that left me scratching my head, not sure what to make of it. For example the protagonist, a “struggling private investigator” referred to a case in South Florida she eventually tries to solve as a “dangerous job opportunity,” which turned out to be true, but nothing that had happened would lead a reasonable person to view it that way. Maybe it was foreshadowing, done poorly. Or I'd hit a line like this one ...

They admired the scenery and the many different kinds of happy people that walked around.

… and I'd get hung up on what this even means and what the point was supposed to be. Not to mention this gem of redundancy.

In the end there was way too much clumsy storytelling and convoluted language use for me to recommend this one.