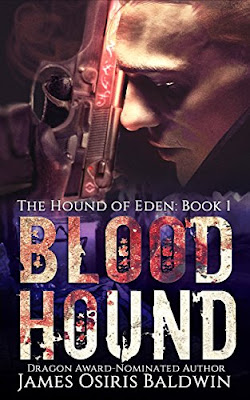 A high-ranking Sicilian Mafioso is murdered and his body dumped in Russian mafia territory. Occult sigils at the scene point blame to the only mage present – hit man Alexi Sokolsky. Forced to clear his name in order to survive, Alexi discovers the murder was an occult sacrifice that marks the beginning of a hunt threatening the world’s social order. A Gift Horse, a creature rumored to carry the secrets of all creation in her flesh and blood, has turned up in New York. Every underworld mage in the city is eager to gain the limitless power she can bestow. In a deadly battle to prevent misuse of the power, she turns to Alexi.

If Alexi fights on the side of the Gift Horse, he stands to lose his life or at least his position in the mafia. If he doesn't, the world will be held hostage by whoever partakes of her gift. With a demon-summoning, psychopathic mage opposing him, the odds are not in the world's favor.
Author:
James Osiris Baldwin writes LGBT-inclusive, dark fantasy and science fiction. He was the former Contributing Editor for the Australian Journal of Dementia Care and has also worked for Alzheimer's Australia. He currently lives in Seattle with his “lovely wife, a precocious cat, and far too many rats. His obsession with the Occult is matched only by his preoccupation with motorcycles.”
Appraisal:
Blood Hound is a spell-binding blend of crime noir and urban fantasy. The anti-hero mage, Alexi, is an angst-plagued, cold-blooded hit man for the Russian mafia. He killed his father with a hammer and murders a colleague after telling him where to stand for best effect to break a magic barrier that he must cross to execute still another individual for the mob.
Alexi is short, unattractive, and antisocial. He is also loyal, tough and, through the magic of Baldwin’s prose, likeable. In the logic of the narrative and of the mob, the people he kills deserve to die. In his determination to seek personal justice and find the Gift Horse for his boss, he is brutalized by stronger thugs and mages. In a moment of stress, he finds his soul in the form of a wise blackbird, who saves his life.
Through adversity, he discovers his true power. Baldwin brings an abundance of imagination to that well explored theme, along with adept writing style:
“My heart shlupped in my chest. It sounded as squishy as I felt, and I was glad that it, at least, was able to move. The rest of my body refused to respond. My brain was a sheen of white noise. Carmine and friends could drive up beside us right now, step out and put a bullet in my head, and there was nothing I would be able to do. Whoever killed Frank Nacari could take me off the street. At least I had made it back to New York.”
A liberal sprinkling of gutter snipe Russian, Ukranian, Italian and Hebrew (Alexi’s mother was Jewish) adds a layer of grit and authenticity to the story.
“As I watched, Hebrew letters etched themselves across his brow, as if they were being drawn through the pallid flesh with the tip of a knife. אמת. Truth.”
Food references support the atmosphere. “I ate a bowl of kasha, the universal comfort food of Eastern Europe.”
So too do a great many well researched references to arcana, including the occult, ancient texts, myths and a drawing in Carl Jung’s Red Book, which Baldwin calls Die Rote Buch instead of Das Rote Buch. The novel is so intelligently written that one wonders if the feminine “die” was substituted for neuter “das” as a jest. The author is transgender.
A touch of Nietzsche: “The only way you can stop GOD looking at you is by removing yourself from your enslavement to it,” added a third voice from across the room.
“I grimaced and pulled across the first book, De Nigromancia, a late Middle Ages tome dedicated to safety during demonic summoning.” The 96-page book is real and can be purchased on Amazon for $299.99.
“Lakshmi? The Indian goddess of money?” Turns up as a mafia idol.
I must respect a writer who respects his readers enough to educate as well as entertain.
Buy now from:    Amazon US    Amazon UK
FYI:
Lots of R-rated language, which is appropriate to the story.
Format/Typo Issues:
There are enough errors to note but not enough to be bothersome.
“I watched him silently ask for clearance with arched eyebrows and a cock of his head toward towards the table.”
“Yuri’s eyes flicked up slowly.” (Flick can only be a quick motion.)
My biggest complaint is an excessive use of ellipses, which slows the reader’s eye, and which I found annoying.
“You are... still weak.”
“And... to what ‘Master’ do you answer to, Yuri Juriovich?”
It seemed… elementary.
“Where did... you learn to shoot like that?”
Rating: ***** Five Stars
Reviewed by: Sam Waite
Approximate word count: 95-100,000 words
Posted by BooksAndPals at 8:00 AM

Welcome back, Sam. "Bloodhound" isn't my 'go to' genre, but this one really sounds interesting. And it's FREE so I am picking up a copy. Thanks for the great review.

As so often, I find myself wanting a like button for these reviews. Your entrancing review of this book and the author's evocative name make the book irrestitible!