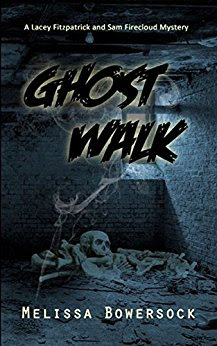 “Lacey Fitzpatrick is an ex-LAPD detective with an axe to grind. Tainted by the betrayal of her drug-dealing cop boyfriend, she’s on a quest to prove to herself—and the world—that she’s still a competent crime-fighter. In order to do that, she teams up with Sam Firecloud, a half-Navajo man who communicates with ghosts. With his talent and her research, they tackle troubling unsolved crimes, but their latest case is the toughest. They have to solve a murder—where no record of a murder even exists. Can Sam glean enough information from the victim’s ghost to unravel the mystery, and can Lacey convince the authorities that the murder actually happened?”

I don’t normally gravitate toward mysteries but Sam Firecloud, a half-Navajo man who communicates with ghosts, hooked me. He’s very private and soft-spoken, he is going to take some time to get to know though. However, I really like what I have seen of him so far.

Lacey Fitzpatrick, an ex-LAPD detective, could be considered Sam’s opposite. She is all about facts, excels in research, and is good about fitting pieces together in cold case files. She is not quite sure what to make of Sam at first and would rather write him off as a quack. However, she becomes a believer from what he gleaned from a cold case file she had been working on before she left the force. Lacey further tests Sam’s abilities when he asks her if she would like to accompany him on another case he has been contacted about. With her interest piqued she follows along with more preparation for documenting his findings. This is where the story’s meat is.

Lacey is a smart, conscientious, but head-strong heroine. Her character development is more fully rounded than Sam’s, but I am excited to learn more about his introspective character. The twists in the story are captivating and not too farfetched to believe. I think this is going to be an enthralling new series to follow and I am looking forward to more from Lacey and Sam’s new partnership.

Ghost Walk is the first book in A Lacey Fitzpatrick and Sam Firecloud Mystery series.

I found no issues with proofing or formatting.

Looks interesting. The cover is a bit of a downer--is this cozy or mor just general mystery?

Maria, I would not call this a cozy mystery. Ghost Walk is more suspense watching the story unfold. Thanks for dropping in and commenting.