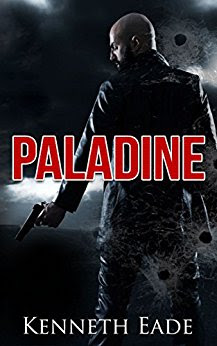 Robert Garcia--ex-special forces--is thrust into the spotlight when he is in the wrong place at the wrong time and kills a terrorist, thereby saving dozens of lives. A vindictive multi-millionaire hires him to kill jihadists whose names he found on a secret government list. Social media gives Garcia the name: "Paladine."

I’ve gotten pretty skilled at weeding out books that don’t suit my eye. I quit on them pretty early. For some reason I kept expecting this story to improve. By the time I realized it wasn’t going to, I was in too deep, so I finished what I’d started.

Gosh, I disliked this novel. The characters, including the MC, Robert Garcia, all came across as flat and one-dimensional. Garcia’s back-story and his combat skills are painfully stereotypical (think Jason Bourne). I do like a fast-pace in my books, especially in this genre, but this was so rushed I couldn’t get involved. Yes, I was turning pages, but feeling more “so what?” than “so what’s going to happen?” In one “kill” Paladine spots seven heat signatures through his infrared goggles. One bad guy leaves which leaves five. Paladine then goes on to kill all eight bad guys.

Paladine is a brutal killer with a total lack of conscience. He’s more sociopath than hero, and he’s getting paid $50K for every hit, so he’s far from altruistic. It’s pretty hard to root for someone like that. His attacks (he hunts Islamic Terrorists), are always perfectly executed. There’s never a moment of tension because whatever happens to him, he has an immediate way to solve the problem: take a bullet in the shoulder, no problem, there’s a dentist a few blocks away who works on the side stitching up criminals. “How much will that cost, Doc?” “For you Robert, no charge.” “You’re too kind, here’s a thousand for your troubles.” In one early incident, he’s eating a burger in McDonald’s when he hears the click of an automatic weapon (coincidental enough for ya?). He swivels and puts three bullets into a guy standing in the doorway. You guessed it--an Islamic Terrorist. Paladine pulls his handgun and kills the bad guy--one bullet to the head and two in the chest. Then our hero leaves like a ghost.

The authorities are inauthentic and incompetent. They perform their investigations simply to suit the author’s plot. I just couldn’t suspend disbelief. But I did like the dog.