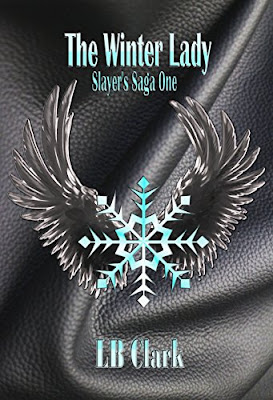 “Faerie children are disappearing, and while Finn Jameson thinks it’s a shame, he’s not stupid enough to get tangled up with the Fae, not for any reason. He’s a demon hunter, after all, not a PI, and it’s definitely not a demon that’s snatching kids from the areas around the mage academies in Seelie. So when a Lady of the Winter Court comes to him for help, his first instinct is to say, ‘No.’ But he never could say no to a lady in need.

As the mystery of the disappearances unravels, Finn realizes his instincts were right. It’s not hard to see he’s gotten in over his head and that the effort to save the girls’ lives may cost him his own.”

“LB Clark currently resides on the third coast in Galveston, Texas, where she spends as much time writing as possible (when she's not being distracted by her roommates, her friends, her day job, books, or random shiny objects). She has loved both writing and music from an early age, so combining the two seemed like the thing to do. In addition to her stories in Music Speaks, LB has published five books in the (completed) Jukebox Heroes series…

LB dreams of one day being able to combine her three big loves - travel, music, and writing- into a career. In the meantime, she'll just keep weaving her travels and love of music into her writing.”

Be sure to check out her books on her Amazon author page or follow her on Facebook page.

Finn Jameson is a demon hunter who is trying to gain redemption for his soul through good deeds. Finn also has trouble telling pretty ladies “No,” especially when kids are involved. He’s also fairly certain this mission may lead to his ruin for a number of reasons.

There are several diverse characters and each is well rounded and defined. Their dialogue is witty and entertaining with a few pop culture references. Finn is a loner who needs a certain amount of alone time to be at his best. However, he has a couple of on and off again relationships with a vampire and a succubus. He also has a drinking buddy, Sebastian, an incubus who is well respected in paranormal politics. They all live in a world like our own blending in, more or less unseen, with the human population.

Since The Winter Lady is the first book of the series there is a lot of time spent on character development, relationships, and world building. I did feel like too much time was spent researching connections between the Faerie children and trying to formulate a rescue plan. Certain areas seemed irrelevant and didn’t move the story forward. Eventually, once the journey starts the pace picks up and we are introduced to different Seelie and Unseelie worlds, some of their history, and frightful creatures that need subduing.

The unique plot twists, turns, and circles as our small band of rescuers chase the culprit responsible. Surprising truths are revealed as the characters learn more about each other and themselves. I loved the ending, even though it threw me for a loop and left a huge smile on my face. Finn’s demon hunting is going to take on a whole new dimension and I also hope to see more of Mae, the Lady of the Winter Court. It’s going to be fun watching this series develop.

The Winter Lady is the first book in the Slayer's Saga series.

A number of small proofing errors, which include missing, extra, or wrong words. Nothing that actually threw me out of the story.