Review: Of Gods and Sorrow by Christine Rains 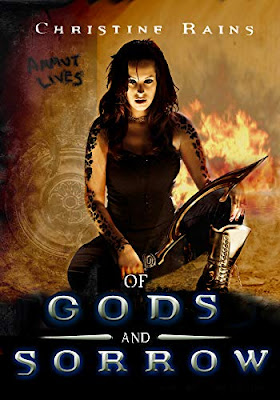 “Stopping the undead will seem like child's play when the Cult of Ammut comes calling.

Even after losing most of her adopted family, Erin Driscol continues to console clients at Putzkammer & Sons Funeral Home. Keeping the funeral business working smoothly is no longer the walk in the graveyard it used to be. Grieving demons are fighting in the halls. Eyeballs are showing up in teapots. And a so-called psychic and member of the Cult of Ammut claims Erin's boss Cort is a god. All Erin wants is a friend to lean on and a sense of normalcy. But as the cult kills people and repeatedly attacks the funeral home, she must stand strong or lose Cort to the Lake of Fire.”

“Christine Rains is a writer, blogger, and geek mom. She's married to her best friend and fellow geek living in south-central Indiana. They have one son who is too smart for his parents' own good and loves to pretend he's Batman. Christine has four degrees which help nothing with motherhood, but make her a great Jeopardy player. When she's not reading or writing, she's going on adventures with her son or watching cheesy movies on Syfy Channel. She's a member of Untethered Realms and S.C.I.F.I. (South Central Indiana Fiction Interface). She has one novel and several novellas and short stories published. Her newest urban fantasy series, Totem, is complete at nine books.”

Erin Driscol continues her service at Putzkammer & Sons Funeral Home with the only surviving son, Cort Putzkammer. Cort is overwhelmed with the business and grief from losing his family. When the Cult of Ammut discovers Cort has the blood of Ammut, they believe that their god, Ammut has returned. This secret cult will do everything they can to possess their god.

While Abdiel, head of security, tries to head off the cult, Erin is there to help. However, she wants to make friends with Ri, a Futakuchi demon about her age. As the bodies of people, and demons who are deemed not worthy by the cult start to pile up Abdiel and Erin are left with no real clues. Until Adriana Tessler an Azebaan demon and skilled investigator joins with them.

The plot twists are an emotional rollercoaster, and the story is complicated by misinformation. On this journey Erin learns more about herself and Abdiel. He is an Allu demon who are brutal unemotional assassins, but there is more to Abdiel than meets the eye. It’s a delight to watch him develop more human feelings. He made me swoon. But back to the book, the big showdown was full of action and death, at times it looked dicey for our heroes. Could they rescue Cort, who was under the control of the cult in a magical trance between life and death?

Of Gods and Sorrow is an excellent second book in this series. I can’t wait to see where this journey takes us next. I have an emotional connection with all of characters connected to Putzkammer & Sons Funeral Home.

Of Gods and Sorrow is book 2 in Ms. Rains, OF BLOOD AND SORROW Series. Adult language, there are several F-bombs dropped.