Reprise Review: Memoirs from the Asylum by Kenneth Weene 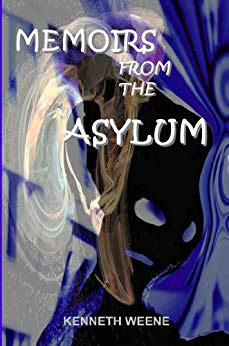 Several streams of narrative flow together in this panoptic examination of life, death, and all the madness in between.

A New Englander by birth and disposition, Ken Weene was trained as a minister and psychologist and has worked as both an educator and psychotherapist. Now in semi-retirement, he lives with his wife in Arizona.

Check out Mr. Weene’s Amazon Author page for more of his books.

I must admit that I didn’t have very high expectations going into this. Like most books by unfamiliar authors, I could only hope for the best while preparing for the worst. Luckily for this cynic, however, Memoirs from the Asylum turned out to be well worth the time spent reading it.

The title seems purposefully ironic. Merriam-Webster defines “asylum” as “an inviolable place of refuge and protection,” but could such a place actually exist? With 58 chapters divided between a mental institution and the equally mad world beyond its walls, this book would seem to answer “no.” In the narrator’s repeated references to his raging uncle’s depiction of a foundering ship, forever unfinished upon its easel, the overall message seems to be that “there is no asylum, no sanctuary, only the endless gray of the tossing seas of the endless paintings of our endurance.”

Paradoxically, the only asylum to be found anywhere is within the patients themselves, even as they become prisoners to their own tormented thoughts. Regardless of their individual limitations and psychoses, they can each take solace in whatever measure of freedom still exists in their heads – provided it hasn’t been completely cut, shocked, or drugged out of them already.

Marilyn for instance, the resident catatonic, hasn’t moved a muscle in years. Instead, “she sits inert in her room. She stares at the crack in the wall opposite her bed. She stares at nothing, and she sees the world.” It is a world inhabited by her childhood sweetheart, her dead mother and brother, and their beloved family dog, taking turns in each others’ roles while perpetually morphing into penises, balls of excrement, and various other objects across a range of fantastical scenarios.

The scatological motif is fitting, given how the patients are typically treated – like crap. One callous orderly “look[ed] more like he should [have been] working in a steel mill or chopping down trees,” the narrator tells us. “but there are no mills, mines, or forests, not around here. We’re the industry, the factory: human waste management at its most medical.”

If they’re not written off or forgotten altogether, the patients are routinely abused by those in position to do so. This is what inevitably happens wherever power is exercised over those with few, if any, rights as human beings. With the exception of one empathetic doctor and a handful of workers, most of the staff seem more interested in pushing pills and preparing budget reports than providing any kind of real care.

Mind you, the patients aren’t the only loons in this bin. Everyone else gets to go home at the end of the day, but given the pathological nature of the world outside, it comes as no surprise that they all have certain “issues” of their own. Everyone is crazy, but everyone knows this deep down. The world itself is an insane asylum, but once again, there is no point in telling this to those of us forced to live in it. Weene is adept at showing this, though, and he does so with a panache that would make the narrator’s departed cousin, Stan, whoop for the sheer joy of it.

The book comes to a rather predictable conclusion, but that’s probably just because there’s no other conclusion to be drawn. Upon his release, it doesn’t take our narrator long to rediscover all of the awful, maddening things that led him to commit himself in the first place. What keeps him going is “the possibility of something better, of something however fragile rising from momentary glory, from a lavender and apricot moment of joy.” The book isn’t quite as flowery as all that, or even as dismal as the image of the foundering ship mentioned earlier. It’s a lot of different, contrary things, but what else should we expect from a book about insanity?

Added for Reprise Review: Memoirs from the Asylum by Kenneth Weene was a nominee in the Contemporary Fiction category for B&P 2013 Readers' Choice Awards. Original review ran June 26, 2012

The Kindle version I read could do with a major formatting overhaul.