Reprise Review: I Coulda Caught That Pass! by John Pearson 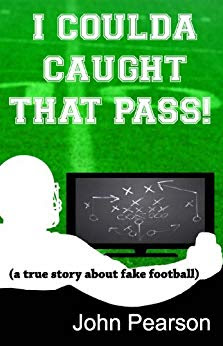 “An inside look at one fantasy football league. A fly-on-the-wall perspective of ten scrappy managers/everyday Joes – more obsessive than some, less obsessive than most. A touching story of one triumphant champion and nine complete losers.

Prepare to step into history.

And by ‘history,’ I mean ‘completely unspectacular events that have happened in the recent past.’”

I joke that I’m not a sports guy and, although it hasn’t always been that way, it is mostly true. However, I am a game player. I wasn’t sure whether this book would do the trick for me or not. It is the story of a single season of play from the author’s fantasy football league. Would a non-football fan still like it?

As with Pearson’s prior books, the entertainment and pleasure in the reading is in the humor: for example, when he applauds two of the fantasy teams near the end of the season for “maintaining the fake integrity of this fake sport,” he finds humor everywhere and it comes through in his writing. Some jokes may fly over the head of non-football fans, but for someone who hasn’t paid much attention to the personalities and happenings in the game for several years, I was surprised at how much I still understood. Having never played fantasy football and with only a vague idea of how it worked, I was still able to understand the rules of the competition and the rationale behind most of the strategy, which appealed to the game player in me. But most of all, there was a conflict (no matter how fantasized it was) to be resolved, and a constant stream of laughs as Pearson and his friends made their way through the season. I’m convinced that John Pearson could take anything and make it funny.

Added for Reprise Review: I Coulda Caught That Pass! by John Pearson was a nominee in the Humor and Satire category for B&P 2013 Readers' Choice Awards. Original review ran October 11, 2012