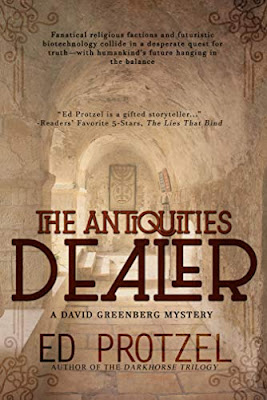 The Amazon blurb says: “When Miriam Solomon, the love of David Greenberg’s life, phones him at his antiquities gallery in St. Louis, the black hole at the center of his heart shudders. Twenty years earlier, Miriam had inexplicably run off to Israel with his best friend, Solly, a brilliant but nerdy young scientist. Now she tells David that Solly has committed suicide and she needs his aid on a secret research project Solly left unfinished: to acquire the one remaining nail from the crucifixion of Jesus. Is she telling the truth? And why does that nail have such significance?” (One wonders that anyone would need to ask why a nail from the Crucifixion would have significance. But blurbs – even my own – are not strangers to hyperbole …)

The author has lived much of his life in St Louis, which figures largely in this book. He lived for a while in the Gaslight Square area of that city, among its wackier citizens, some of which colourful characters have probably found their way into this book. He writes with authority of students working their way through college by gambling (including playing chess). As well as this novel, he has published the first two parts of his DarkHorse trilogy of novels and the third is due out this year. He spent several years producing screenplays in LA, looking for the big break which never quite came. He has a Master’s degree in English Literature and Creative Writing from the University of Missouri-St. Louis.

This book hits the ground running. David Greenberg, the narrator, is a cultural, urban Jew of the darkly witty and ironical sort. It quickly becomes apparent that he has no self-control where Miriam is concerned, so of course he agrees to help her acquire The Significant Nail. I cannot tell you why she needs it, as that would be a massive spoiler. But trust me when I say the reason is a doozie. As is the McGuffin constructed out of the chess Game of the Century played between Bobby Fischer and Donald Byrne in 1956. There is also (of course) a secret society in Israel which runs its own university, possibly a Second Coming, and a red-neck Christian preacher who is quite happy to use strong arm tactics to meet the potential New Jesus. There is, as you can see, plenty of plot.

There are a few infelicities in said plot. I found these irksome: the twin assassins with identical birthmarks; that people kept attempting to flee to safety in cars which they knew carried tracking devices placed there by their enemies; the ease with which Swiss bank account details were acquired and bandied about. There is an increasing flabbiness as the story approaches its endgame, leading to some implausibilities (a bit of a surprise as this is Protzel’s fourth novel: it makes one wonder what sort of editing is provided by Touchpoint Press). But by that time I was sufficiently intrigued by what was playing out to skip over the less well-focussed bits.

This is the second history and mystery using the Crucifixion story which I have read this year. It is fruitful ground for fiction writers. Both novels are thought-provoking and relevant in the twenty-first century. Inevitably there are nods to Dan Brown here, in the arcana and the sudden flashes of imaginative and unpleasant violence, although the protagonist is both wittier and more passive than Robert Langdon (and the violence is less extreme).

The McGuffin is well used and well explained in the story. It is explained again, unnecessarily, in an addendum to the story. The standard (presumably) chess notation used in both renditions did not format readably on a Kindle using the file I was working from.

Glad you got so much from the story, Judi! I thought it was a very incisive and thorough review.