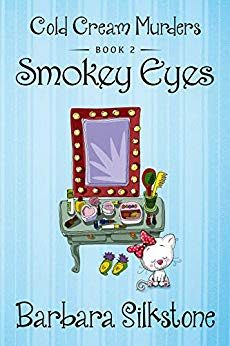 “Olive and Lizzy’s Cold Cream shop on the beach is jumping—business couldn’t be better. But when land shark mogul Brent Toast is found floating in the Starfish Cove marina, with his sneer-side up and a knife in his chest, the prime suspect—among his many enemies—is his brassy daughter-in-law. Can Olive & Lizzy save their friend or will this be the end of the Loud Mouth of the South?”

Nancy Nemo, a local restaurant owner, buys herself a sailboat for her fiftieth birthday. Olive finds herself on the boat's maiden voyage around the cove, which should have been a fun time, everyone else is having fun. However, Olive is sure she’s going to end up as shark bait as all of her water phobias swirl in her mind. After making it back to the dock Olive discovers she left her bag on Nancy’s boat and has to return to retrieve it. With a misstep boarding she finds herself clinging to the side of the boat. When Brent Toast’s body floats by with a knife in his chest, Olive finds her voice to scream. Brent Toast is a money hungry land mogul with many enemies.

Ms. Silkstone introduces a few new quirky characters as she weaves Olive’s cold cream business with her armature sleuthing savvy, and her psychological finesse to clear Jamie Toast of her father-in-law’s murder. Smokey Eyes is a multi-layered story as Kal, the local detective, advises Olive to stay clear and let him handle the investigation for her own safety since word has gotten out that she may have seen the killers eyes through the fog. With Lizzy and WonderDog at her side, Olive ignores Kal’s advice. Tension builds as pieces of the puzzle come together as Olive eliminates suspects as only she can. In the midst of murder mystery there seems to be a problem with Nonna’s cold cream recipe. In her haste to reproduce the cold cream, Olive overlooked a key ingredient that turns Nonna’s miracle cold cream into a magical cold cream.

Ms. Silkstone has a delightful way of playing with words that make her stories entertaining and easy to read. Her characters are realistic, intelligent, and loveable. With exception to the evil-doers who are shrewd and not so easy to spot. If you enjoy clever, smartly written cozy mysteries you are sure to find Ms. Silkstone worth your time. As a bonus there is a Smokey eyeshadow recipe at the end of the book.