Review: One Night by Deanna Cabinian 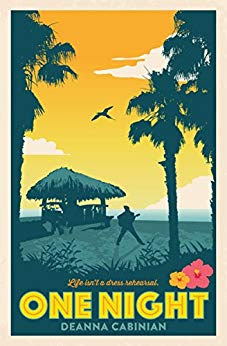 “Since Thompson got dumped on Valentine's Day he's been miserable. He wants Caroline back and shows up at the Tiki House on Elvis Presley night, hoping he'll run into her.

Instead of running into her he meets Johnny Lee Young, Hawaii's favorite Elvis impersonator. As luck would have it, Johnny needs a temporary assistant and Thompson eagerly accepts the offer, hoping it will distract him from his painful breakup. He soon finds out Johnny has a secret heartbreak of his own and embarks on a journey to help him find the one who got away.”

“Deanna Cabinian is the author of One Night and One Love. When she isn't working or writing she enjoys traveling and spending time with her husband and their Havanese dog, Cuba.”

Thompson Lake is a seventeen year-old high school junior who describes himself as a scrawny AP class nerd. He lives in Honolulu, Hawaii and despite living in paradise he is miserable. His first girlfriend, the love of his life, has dumped him and he can’t stop obsessing about her. She consumes his every thought, and now she’s gone. Even though she cheated on him, he would take her back.
One Friday evening after work Thompson goes to the Tiki House for Elvis Presley night, hoping he'll run into her. Instead he is struck by a song that Johnny Lee Young, Hawaii's favorite Elvis impersonator, sings about the heartbreak of losing the one you loved. Thompson feels like Johnny understands his pain and he starts a conversation with him. Now he’s showing up at all of his gigs just to talk with him. They slowly develop an honest and respectful relationship. Thompson sees Johnny as the big brother he never had.

In One Night, Thompson embarks on a mission to find Johnny’s lost love. The plot is character driven, engaging, honest, and well written. All the characters are well rounded, likeable, and their dialogue is genuine. I found it easy to get swept away in Thompson’s journey, and the quest he inspires in Johnny. One Night is an impressive debut novel from Deanna Cabinian, whether you love Elvis or not you will fall in love with Johnny Lee Young.

Email ThisBlogThis!Share to TwitterShare to FacebookShare to Pinterest
Labels: 5 Star, Coming of Age, Contemporary Fiction, YA

Thanks for dropping in and commenting Ms. Boris. "One Night" was a delightful surprise. I hope you enjoy it as much as I did.