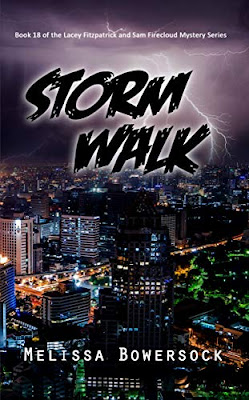 “Los Angeles has been besieged with relentless rain for weeks. There has been massive flooding, swift-water rescues, and an entire warehouse has collapsed from the weight of catastrophic rainfall, resulting in the death of six people. When medium Sam Firecloud is asked to connect with the only ‘witnesses’—the victims—he finds more questions than answers. He and his partner, Lacey Fitzpatrick, must take on the police, the insurance company and the architectural firm as they realize that things are not as they seem. Sam and Lacey aren’t experts in any of the associated fields, but they do know one thing—the dead don’t lie.”

In Storm Walk, Sam Firecloud is asked, by a warehouse owner, to investigate why the ceiling collapsed during torrential rain fall, killing six of his employees. The insurance company is calling it an act of God and therefore they are refusing the owner’s claim. Storm Walk is different from the other stories in this series because there are no earthbound ghosts to help move on after this tragedy.

It’s Lacey’s job to investigate the building specs, blue prints, and question the architects of the warehouse to figure out what went so devastatingly wrong with this building. No one wants to accept the culpability for the roof’s failure. Lacey and Sam are both out of their element with this jigsaw puzzle. Lacey has always been in touch with her intuition, which makes her an excellent investigator. To solve this mystery, Sam and Lacey need to figure out the right questions to ask to find the answers they seek.

In other news, there is teenaged drama on the home front. Daniel’s girlfriend, Tori, has broken up with him. So, he is all sulky and angsty, making everyone around him miserable as well. Tori is a smart young lady, and I give her kudos for standing up for her convictions. Perhaps Daniel won’t be so flippant with female feelings in the future.

You're welcome, Ms. Bowersock. I'm looking forward to the next 18 journeys you send Sam and Lacey on. :D Thanks for dropping in and commenting.