Review: Where Are They? by Steven Lazaroff Mark Rodger 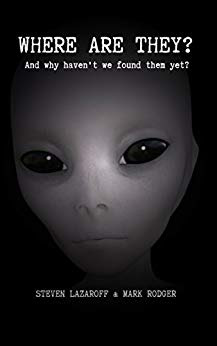 “Does Alien life exist out there? The purpose of this book is not to take one side or the other in that argument. It is to explore the present state of knowledge and to say where humanity now stands on the question of whether or not we are alone in the universe. Because there isn't the slightest doubt: that is a question that has occupied humans since they became human, and it's a question that shows no sign of going away.

And if there are intelligent beings elsewhere in the universe - where are they?”

“Lifelong friends, Mark Rodger and Steven Lazaroff have studied, researched and debated the Fermi Paradox, the possible existence of extraterrestrial life, and the SETI program that is searching it out. Amateur UFOlogists, historians and explorers, they have applied their research skills and passion to attempt to explain, in layman’s terms, the hunt for life amongst the stars, and to attempt to explain why Humanity may not yet have had contact with alien life.

Mark Rodger is from Winnipeg, Manitoba.

Both are unapologetic Canadians.”

As the description points out, the question that has occupied humans since there have been humans is whether we are alone in the universe. Are there other intelligent beings living out there somewhere. The authors explain the science and theories in an understandable way that a normal person should be able to easily grasp. Of course, as is often the case, even the basic question isn’t as straightforward as we might think. What does it take to qualify as an intelligent being? If we found robots that possessed artificial intelligence that was on par with our own, would that count? And if we did find something like that, how could those robots have come into existence to begin with? All good questions. Read the book and you’ll get some possible answers to these and many others you might not have even thought of yet.