Reprise Review: The Way of the River by Randy Kadish 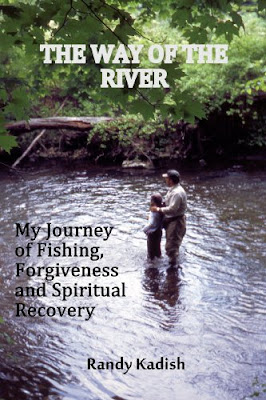 “The Way of the River is a collection of memoirs and autobiographical stories that reflect Randy Kadish's long journey of fishing and spiritual recovery. The journey, often difficult, often gratifying, began when he finally admitted to himself that he couldn't communicate, and that his life had become unmanageable.”

Randy Kadish’s writing has appeared in flyfishing journals and magazines. His stories often combine his love of fishing with people struggling to do good while fighting their demons. Kadish’s fishing tips and more information about his book and stories can be found on his website.

Most of my life, I’ve divided books into three categories, which I’ve read for three disparate reasons. Fiction was for entertainment. Non-fiction was divided into the more technical, which was for learning, and those that were biographical, to re-live things I’ve experienced in the past and to live vicariously those I haven’t. The latter were also good for comparing the thinking and motivations of other humans, both as a means to understand others and to help understand myself. I’ve since realized that benefits overlap more than my explanations would indicate, but as a broad brush definition, I think they’re valid.

My reason for bringing this up is twofold. The first is that Randy Kadish’s writing I’d read prior to this was fiction, yet it was one of those exceptions, where in addition to entertainment, there was a lesson to be learned about the human condition buried in there if you were interested. My second thought is that, in the past (before the days of indie publishing), most memoirs I was aware of were by someone famous (or possibly infamous). While they might be inspirational (maybe a rags to riches story), they were also about people who, because of that fame, were harder to relate to, even if their name made the book more marketable.

I’ve found I can relate to the memoirs from people whose lives are more mainstream. Kadish is much more like you or I than one of those more famous memoirists. That Kadish and I are both male and about the same age might help too. This book is a series of essays where he works through the things that bother him about his life so far, regrets for choices not made and paths not taken. Each is done against the backdrop of his avocation of flyfishing, with his challenges on the river or stream often helping illuminate something about his life. It resonated for me, though I’ve never cast a fly in my entire life.

Added for Reprise Review: The Way of the River by Randy Kadish was a nominee in the Memoir category for B&P 2013 Readers' Choice Awards. Original review ran October 19, 2012