Review: The Clown by E.M. McCarthy 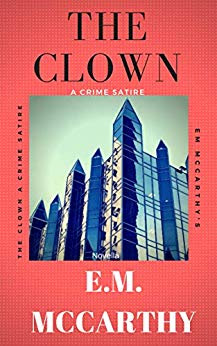 “Only in Pittsburgh can a guy walk into a bank and come out a folk hero.

Jeb Jefferson loses his job, and the perfect solution to his economic reality is unconventional, illegal, and uncompromising. Jeb's clown is a smart, methodical bank robber. He gets away with it until his girlfriend begins to suspect him. She tries to leave him, and still, Ariel can't leave him completely. Her childhood friend, Scott, has his own set of problems made worse because he's in love with her.

Just as the trio grapples with where everything is headed, the city of Pittsburgh is terrorized by The Clown. The police can't stop him. Then the copycats make it even worse. The real problems begin when the politicians get involved in crime and punishment. Will Ariel stay with Jeb? Will Scott tell her how he feels? Will Jeb be caught? A Heist Thriller set in Pittsburgh.
The social impact of joblessness in modern Pittsburgh is the perfect incubator for the perfect crime spree.

Twenty-one points-of-view characters tell the story from every angle (even the Three Rivers have an opinion). Part crime thriller, part satire/comedy, and part romance, The Clown is a play-like novella.”

“E.M. McCarthy has an Education degree from Penn State. Her recent novella,The Clown, was a Staff Pick on Write On by Kindle in Humor. E.M. likes to garden, read, cook, and watch Pittsburgh sports.”

The concept is an interesting one to consider, ridiculous, yet clever too. Commit armed robberies and other crimes dressed as a clown. You’ll stand out in a crowd, but what are the odds that anyone will be able to identify you later? Start a little crime spree and soon legitimate clowns will look suspicious, copy cats will come out as well. Maybe you’ll get away with it.

The book description even tells you the culprit is a guy named Jeb. Well, the main culprit at least. And that’s fairly clear near the start of this novella. It’s a quick read, with short, easily digestible sections, each of them having an ever-changing character providing the point-of-view for that section. Jeb, his girlfriend Ariel, and Scott, a bar owner with a stutter who has had a thing for Ariel since they were kids, are the characters we see the most. But there are plenty of other minor characters that provide their point of view, some random people who become involved in the crime spree. Some of the characters aren’t even human, with the City of Pittsburgh where the story takes place and the Ohio River both providing a point of view. Yes, it’s different, but not as strange as it might sound. Along with wondering whether Jeb is going to get caught, if the clownish crime spree will continue, we’re also kept guessing as to whether Ariel and Jeb are going to last as a couple. If Scott gets his wish, the answer to that last question will be a definite NO. A fun read and interesting change of pace from the norm.