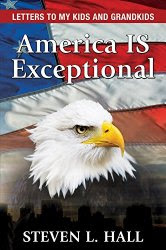 “The Idea of America led to independent sovereign States, then to a Constitution and a new Union. The results of this 'American Experiment' were exceptional. Phase One, the first 120 years or so, marked a quantum leap in the standard of living and wealth, the result of a free people living under the Rule of Law. In Phase Two, since about 1900, America has diverged from its founding principles; today we find a country exceptional in many other ways, some of them not so positive. We are now entering Phase Three, and it is critical that more Americans are involved in the democratic process; that they identify their core beliefs; that they learn about our founding principles; and that they understand the politics and economics that are affecting our future as a nation. Throughout history great nations have risen and fallen; there is no guarantee that the American Experiment will survive. But it should. Liberty, the recognition of unalienable human Rights, and the Rule of Law are critically important. Freedom, however, is not free. This book started out as a series of letters and rants to my kids and grandkids, an attempt to help them learn about the issues facing us. It is for anyone who believes in the Idea of America and wants to participate in keeping the American Experiment alive.”

An Idaho native and graduate of Boise State University (Go Broncos) with a Business Administration degree in economics, Steven Hall is an entrepreneur. He is also a self-described “student of political and economic systems.”

I'll start this review off with a confession. Going in, based on my quick scan of the book description, I fully expected to vehemently disagree with the vast majority of America IS Exceptional. Your reaction to that statement might be, “then why would you read it?”

The answer is simple. I believe that one of the biggest issues with current political discourse in the US is that too many Americans don't bother to understand the case to be made for the other side of an issue. It's as though they're afraid to let their beliefs be challenged, instead preferring to limit the information they use for political decisions to sources such as the not-so-fair-and-balanced Fox News or one of the over-the-top liberal websites. If we all refuse to exit our echo chamber, nothing will ever get accomplished other than creating a bunch of noise and we all lose. Nothing gets done and problems remain unaddressed.

Unfortunately, all too often the politically oriented books I read are filled with the standard talking points which from my viewpoint have gaping holes or obvious flaws. Regular readers of my reviews might have seen my less-than-complementary take on one or two of those. Even if there is a valid point in those books, the mountain of bull excrement makes it difficult to find any diamonds buried within. America IS Exceptional is different in this regard.

A few years ago a friend of mine made a statement about politics that has stuck with me. She said that in political discussions we should keep in mind that “we all want the same things,” giving examples of having the opportunities available to pursue our goals, have a good life, and leave a better world for our kids and grandkids. The author explains this book originated as letters to those kids and grandkids with a disclaimer that due to this there might be a bit of redundancy he'd failed to edit out while he was compiling and polishing them for this book. There was a little redundancy, but more importantly, it was obvious that he and I have the same big picture goals in what we want for our kids, grandkids, and all Americans, now and in the future.

More of a surprise to me, we mostly agree on the reasons or at least symptoms of underlying issues that show we're falling short of our mutual hopes and dreams for the country's future. Any disagreement is on the solutions and there were far fewer disagreements than I expected. (Regardless of your political ideology, I'd be amazed if you didn't find some areas where you and the author see eye to eye.) In some instances where I didn't agree, I still found my opinions being changed or at least modified a bit some of the time, and in all I came away with a better understanding of why some people feel differently about an issue than I do.

I could hit on examples of areas of agreement or attempt to refute those where I think he's off base. But I'm not sure that would be useful for the potential reader. Instead I'll suggest that whether you expect you'd agree or disagree with the author, you're probably only partially correct, and I think could benefit from his insightful perspectives either way.

A small number of typos and other copyediting and proofreading misses.

What a terrific and well reasoned review, Al. As my reaction to the title was as you described, I'll have to give the book a try.

Thanks, Pete. I'd be curious on your take.