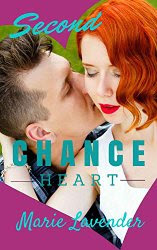 “After a wild storm forces her to take shelter in a small town inn, Dana Nelson thinks that all she has to worry about is a brief stay before she heads back to the city. She gets far more than she bargained for…

The last thing she expects is to run into an old flame, and even worse, the man who broke her heart twelve years ago. She’s sure that the only thing remaining between them is a strong attraction for another.

She can’t be more wrong…

The more time she spends with Vince Reynolds, the more she begins to believe she can trust him again. But, can she put her faith in the one man who captivates her, body and soul, or are some wounds too deep to heal? “

“Marie Lavender lives in the Midwest with her family and three cats. She has been writing for over twenty years. She has more works in progress than she can count on two hands…

Since 2010, Marie has published 22 books in the genres of historical romance, contemporary romance, romantic suspense, paranormal romance, fantasy, mystery/thriller, literary fiction and poetry. Her current series are The Heiresses in Love Series, The Magick Series and The Blood at First Sight Series. Feel free to visit her website for further information about her books and her life. Marie is also on Facebook.”

This short story is a quick enjoyable read. Dana Nelson is a lawyer who had her heart broken by her first love, Vince Reynolds, twelve years ago. Vince came from a broken, dysfunctional family. Even as a boy growing up he was withdrawn and anti-social. Vince and his dad moved into town when he was about eleven or twelve. Dana, being a vivacious, outgoing child tried to make friends with him quickly. They dated in high school but the long distance dating in college hadn’t worked out well for either of them.

When confronted with Vince during a storm at a small inn in the middle of nowhere, Dana’s broken heart overwhelms her and all the old anger comes crashing back over her. The magnetism between them was palatable, but Dana can’t move past the heartbreak. Logically she tried to figure out why she still carried the hurt twelve years later when she thought she had moved on. I felt for them both, Vince wasn’t a bad guy but he had made a huge mistake, and he knew it. It was interesting watching Dana work through her self-imposed dilemma.