Review: So Much For Buckingham by Anne R. Allen 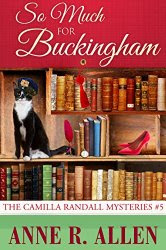 “This comic novel—which takes its title from the most famous Shakespearean quote that Shakespeare never wrote—explores how easy it is to perpetrate a character assassination whether by a great playwright or a gang of online trolls.”

Anne R. Allen is the author or co-author of several novels, a short story collection, with a few non-fiction books thrown in as well. Before turning to writing, Ms Allen spent twenty-five years working in the theater as an actor and director. Anne and NYT bestselling author Ruth Harris have a popular blog that covers issues in publishing that has named on several “best of” lists, including one from Writer's Digest and another co-run by the Association of American Publishers, but this is the one I think you should find most impressive.

On the surface So Much for Buckingham is a little bit suspense novel, several mysteries rolled into one, or what the author describes as chick-lit noir, which is a fitting description for the way it combines the humor of chick-lit with a darker edge. The story is told from two alternating points of view, that of the protagonist, Camilla, and her friend Plantagenet or Plant, for short. Plant is on his honeymoon to England, alone. (His new husband abandoned him and fled to a new-agey retreat in Hawaii with one of Camilla's ex-boyfriends.) Meanwhile Camilla, a bookshop owner and author of books on etiquette, is holding down the fort at home. The short alternating chapters keep the pace fast and the reader turning the page. How the various mysteries and conflicts are related, if at all, and how they resolve, kept me guessing until the end.

Along with all the above is satire, taking pokes at various internet behavior. (Think in terms of trolling and internet vigilantes.) For the average reader much of this might seem far-fetched and over-the-top. Viewing the story from that perspective works fine. However, for those readers who are plugged in to various happenings in the publishing world over the last few years or have hung out in the right Amazon forums, these parts will seem more nuanced, less satirical and more true to life. Yes, there really are people that crazy out there.

While part of a series, I had no issues reading this book as a standalone.