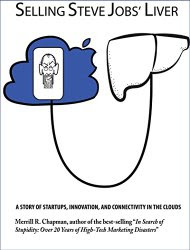 “In 2003, Apple co-founder and CEO Steve Jobs was diagnosed with a rare form of pancreatic cancer.

By 2009, the cancer had spread to his liver. Near death, Jobs flew to Tennessee, where he underwent an organ transplant. The fate of the discarded liver remains a mystery, one that is revealed in Selling Steve Jobs’ Liver: A Story of Startups, Innovation, and Connectivity in the Clouds.

Selling Steve Jobs’ Liver ... begins when two serial-failure entrepreneurs, Nate Pennington and Ignacio Loehman, are contacted by a mysterious man who sells them the technology titan’s lost liver. The opportunity inspires them to ideate, innovate, and finally create a new company, Reliqueree, whose mission is to reposition death and dying in the market's mind by replacing 20th century mortuary processes and concepts with fresh thinking and new technology to enable the living to enjoy the benefits of enhanced remembrance and connectivity with those in the post-life.

Determined to change the world, Nate and Ignacio create the uLivv, the first device designed to leverage the IoDT (Internet of Departed Things). As part of their launch strategy, Nate and Ignacio repurpose Steve Jobs’ genome and liver to create a compelling value and promotional proposition for their new family of products and services.”

Merrill R. (Rick) Chapman is the author of a few non-fiction books including In Search of Stupidity: Over 20 Years of High-Tech Marketing Disasters. He has also written another novel, Rule-Set: A Novel of a Quantum Future and is the managing editor and publisher of managing editor for Softletter, a software industry newsletter.

Selling Steve Jobs' Liver could be described multiple ways, some of them contradictory, yet all reasonable interpretations for some readers.

It's satire, poking fun at entrepreneurs and consumers alike. It explores the relationships between those who are living and our dearly departed whether that is driven by religion, superstition, or science. Maybe that should be superstitious religion or superstitious science. But as with all good satire, nothing is so far out there as to be impossible. (How many of us have been taken in by phony satire news sites or Andy Borowitz writing for The New Yorker?)

Many of the experiences Nate and Ignacio have are similar to that of other high-tech entrepreneurs and with the exception of their product being a bit “out there” (at least by today's standards), their actions and reactions are reasonable. There are some lessons to be learned about how drive and focus can eventually lead to success.

Last, while not needed to enjoy the story, fans of high tech will pick up on things that will sneak past others. One example that anyone who knows anything about Apple will get is when one character described himself as being “wound tighter than Tim Cook using a Samsung phone at gunpoint.” But old-timers like myself who have been paying attention to the computer industry since before anyone had heard of Jobs, Wozniak, or Gates, will see a lot of names dropped and other references that will bring back memories. (The author includes a list of names and who they are at the back of the book for those who are curious or having a hard time dredging the details from the archives of their brain.)

Anyone who likes near-future science fiction or stories that revolve around the struggles for success in business should find something to like in Selling Steve Jobs' Liver.

One F-bomb is the only adult language I spotted for those concerned with such things.

A small number of typos and other copyediting and proofing issues.